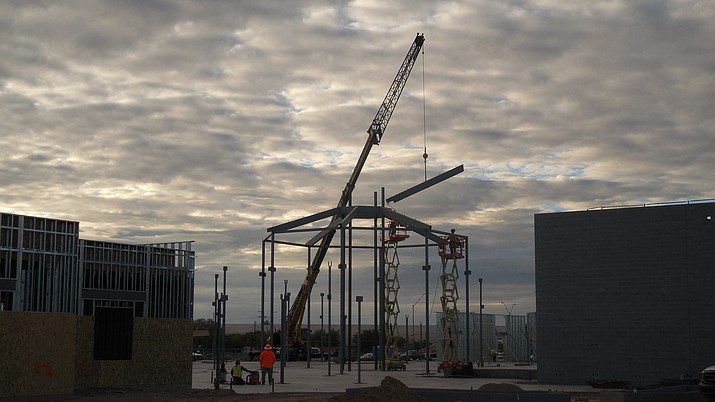 TUBA CITY, Ariz. — The construction of Tuba City’s new digital, sustainable school is moving along with construction of more classrooms, a multi-purpose building, gym area, an auditorium stage and cafeteria, including a food preparation and storage area.

The new school will feature green technology with cloud computing capability throughout all buildings, classrooms and research pods, passive and active solar concepts and tribally appropriate cultural design elements for the kindergarten through fifth grade school

CORE Construction, under the local supervision of Tuba City Unified School District construction manager Wayne Nez, said if the construction progress as quickly as it already has, the new school could be completed by its original target date of December 2017.

The new school became necessary to be able to offer TCUSD students the highest and latest offerings in new technological and green building advances to keep pace with current outside educational building and school research standards.

The old middle school building was originally built in the 1950s and was not able to provide the electrical wiring or energy for current student needs to use computers or cloud research on portable devices.

This is the first time that a digital school focused building has been attempted on a Native American Indian reservation in northern Arizona. Only one ever school exists that is like the one being built; that school is located in Tucson, Arizona.

The new school will be like the Tucson school and will feature cultural and tribal design concepts throughout the entire facility, including exterior paint, interior paint, four directions, sacred colors and garden planters in front of each building that will feature medicinal and indigenous local native plants.

Nez said that Core’s construction knowledge has made all the difference in building the school and the fourth and fifth grade building has its exterior and roof structure 90 percent complete and inspections are currently under review.

“When it gets to its final acceptance, the rough-in for plumbing and electrical will start on schedule,” Nez said.

“Overall, I am really happy to report we are at 25 percent complete on the total project,” Nez said.

More information on the TCUSD digital school project is available by contacting either TCUSD Construction Project Manager, Wayne Nez at (928) 283-1015 or Jessica Bateman at CORE at (602) 684-4580.