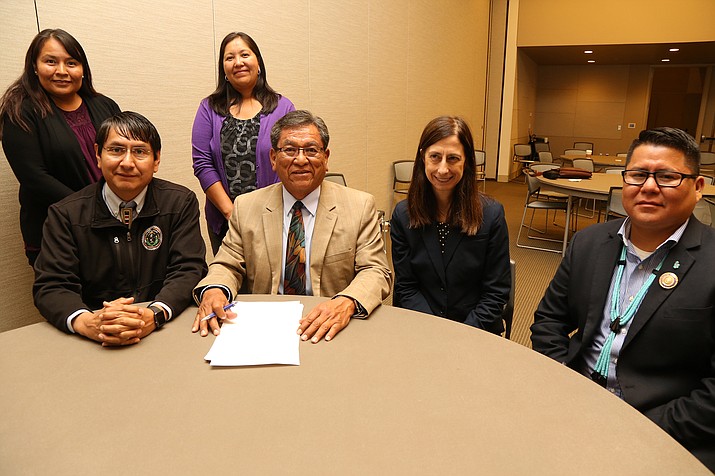 In attendance also were Mary Smith, principal executive director of the Indian Health Service (IHS), along with Terralene Massey, director of the Navajo Division of Social Service (NDSS) and Council Delegate Nathaniel Brown (Chilchinbeto, Dennehotso, Kayenta). The signing took place at the IHS and Tribal Advisory Joint Committee meeting at the National Congress of American Indians.

Smith said during the event, that Native American women experience domestic violence at twice the rate of non-Native women.

“It’s a big issue in Indian country,” she said. “We at IHS applaud the leadership of President Begaye, Vice President Nez and the rest of the Navajo Nation in their efforts to eradicate domestic violence on the Nation and throughout Indian country.”

Begaye told Smith that his administration is serious about eradicating domestic violence and he looks to the federal government for continued support. Social ills that exist on the Nation coupled with lack of employment are big contributors to the problem, he said.

“It’s great to have Director Smith with us today,” Begaye said. “Many of our support programs on the Nation are funded through the federal agencies. Their support is critical.”

“The Navajo Nation is a matrilineal society and we must return to protecting our women from the dangers of domestic violence and sexual abuse,” Nez said. “The Begaye-Nez administration stands by the statutes of the Violence Against Women Act and advocate for strengthening penalties for violence against women on the Navajo Nation.”

The Navajo Nation has recently implemented a new program addressing domestic violence called the Strengthening Families Program. Massey said the program is aimed at addressing the problems of domestic, family and dating violence.

“The program will provide an outreach in prevention education,” she said.

Massey also noted that NDSS is looking to build a shelter-based service for the program in the Shiprock area that is slated to be open in 2017.

The issue of domestic violence extends to many other problem areas that affect all Native American communities. Brown said the Navajo Nation Council is currently working on legislation that address human and sex trafficking.

“Our people are dealing with this,” he said. “It’s an issue that is something we need to look into for the sake of our children who are being exploited. We need to pass legislation where we work in collaboration with the Arizona Human Trafficking Task Force.”

Begaye and Nez called on Navajo people to support Domestic Violence Awareness month by taking care of one another, educating themselves and their children on the issue and spreading awareness in general.

“If one woman is the victim of domestic violence, then that is one too many,” Begaye said. “We really need to honor the beauty of womanhood that exists within our traditional beliefs. Domestic violence should never happen here on the Navajo Nation or anywhere else.”