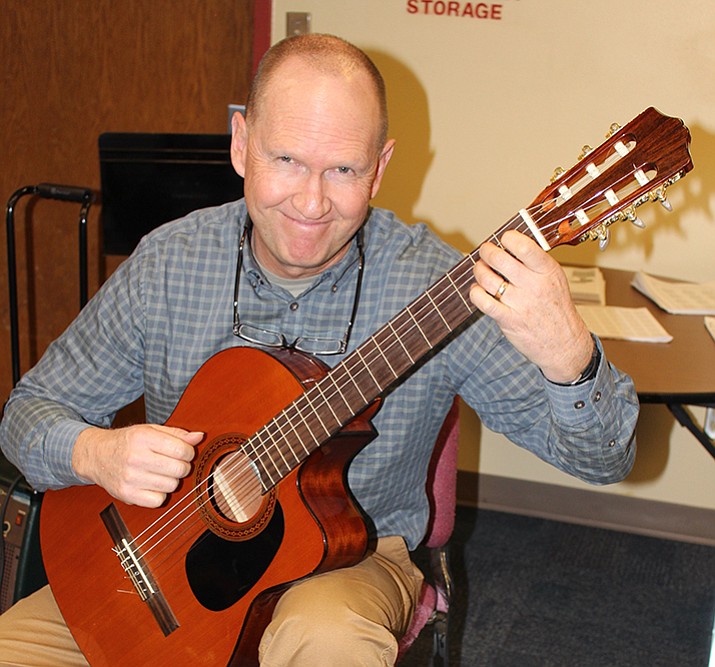 POLACCA, Ariz.—The music man has returned to Hopi Jr/Sr High School. Music teacher Thomas Irwin has returned because of his love of teaching music to students on the Hopi Reservation.

“I love being a teacher on the rez because I love rez kids,” he said.

Coming in at the end of the quarter, Irwin is only teaching one guitar class now, but in January he will be teaching beginning band, advanced band, beginning guitar, advanced guitar and percussion.

“My main goal is to get Hopi Jr/Sr High School known for its art programs,” he said.

“We have a unique location and culture that would be good for coffee shop performances,” he said. “Mary Duwyenie’s kids could talk about their pottery or art.”

Irwin said he appreciates that the radio students read aloud.

“Reading aloud is a good way for Native American kids to express themselves. If you can read well, you can express ideas. We can have public readings and coffee shops,” he said.

This all ties in with Irwin’s music program because he believes that music is an effective way to communicate.

“Students should be able to communicate with the public without being afraid,” he said. “It’s all about pronunciation and communication.”

Irwin has written a program called “Prosidy,” which is about speaking with expression, such as using body language with words.

“This can help the students become stronger communicators,” he said.

Another goal for Irwin is building relationships with his students.

His last job was at an elementary school on the Hualapai Reservation in Peach Springs working on a three-year grant as a reading teacher. He said his students reading scores jumped by 20 percent. He feels he can play a role helping Hopi improve its low-test scores, but he points out the low-test scores are everywhere.

He said Winslow’s test scores are ranked in the lowest 9 percent in the state.

“Our kids can learn to communicate,” he said. “I expect the students to do their very best. They can be really great. They are as talented as anyone.”

Irwin said the key to improving is the students’ believing in themselves. He said a BIE study in the 1990s showed that while some educational strategies were working with the poor people in inner cities that they still weren’t working on reservations because of the “oppositional identity” of Native Americans. This meant that Native American students see themselves as opposed to mainstream society.

This is the reason that Irwin fully supports that Hopi Jr/Sr High School has implemented a daily affirmation.

“If they believe in education then they can do it,” he said.

Irwin said Hopi Jr/Sr High School is in a good position to lead on this project. He said the success of his music program could be measured by student attitudes and student performance.

Irwin will be teaching many genres of music including classical, jazz, blues, rock, reggae and folk. He plans for his music students to give a performance in late April.

Irwin earned a BA in music from Western Colorado State, a reading endorsement from the University of Phoenix and he has almost completed his MA in educational leadership from Northern Arizona University.

“Some schools spend the majority of their time raising money, but we’re well funded so there are great opportunities,” he said. “I’ve always liked the kids and parents here because they have a great perspective.”

One of his previous jobs was teaching at Northland Prep in Flagstaff.

“The Hopi kids are humble, so I would like to work here until I retire,” he said.