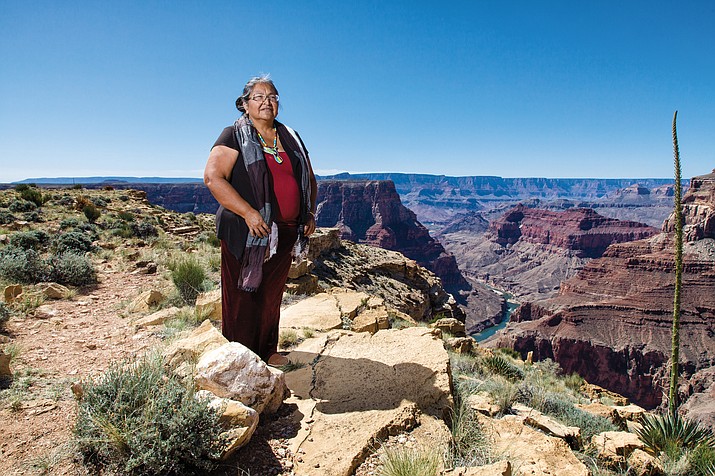 Save the Confluence member Renee Yellowhorse stands at the Confluence, a site the Navajo and Hopi people hold sacred. Photo/Ryan Williams Photography

LEUPP, Ariz. — On Oct .10, the Law and Order Committee (LOC) unanimously opposed legislation which seeks to approve the master agreement to develop the Grand Canyon Escalade project and approve $65 million for development of offside infrastructure for the project.

The master agreement, opposed by the Law and Order Committee, also would authorize the Navajo Nation Hospitality Enterprise to enter into a development and operating agreement, approve a non-compete agreement, waive certain provisions of the Navajo Nation Code and accept approval of the land withdrawal in the Bodaway/Gap Chapter.

Confluence Partners LLC, from Scottsdale, Arizona, hopes to build a gondola tramway delivering visitors to the canyon floor in about 10 minutes, a river walk in the canyon with an elevated walkway and a food pavilion. The area is located on the western edge of the Navajo Nation at the Confluence of the Little Colorado River and the Colorado River about 100 miles by road from Interstate 40 and Flagstaff, Arizona.

Council Delegate Benjamin L. Bennett, sponsor of the legislation that is making its way through various committees and who introduced it Aug. 29, said the project would allow the Nation to take part in the tourism market.

“The proposed project will create jobs and economic opportunities,” he said. “Our Nation is facing shrinking revenues from coal, oil and gas and this project will assist those decreasing deficits.”

Bennett said the 66,000 comments which opposed the project most likely came from non-Navajos who do not know the daily situation on the Navajo Nation.

“This proposed project is for our children and for our Nation’s future,” he said.

Begay questioned whether any recent supportive documents for the project exist since all the documentation he saw was from two to five years ago.

“This is not included in the Navajo Nation Division of Economic Development’s priority listing as well,” Begay said. “In 2012, the chapter approved a resolution with a 59 to 52 vote to support the Escalade project and land withdrawal. That is a close vote among the chapter members. Has there been a public hearing regarding this initiative? The Navajo people need to be engaged with this proposal because this is a request for the people’s money.”

According to Hale, the Nation would retain ownership in all the land and improvements, and Confluence Partners L.L.C. will develop and operate the project under development and operating agreements with the Navajo Nation Hospitality Enterprise. Confluence Partners would contribute $162 million to develop and construct the phase one improvements and the Nation could contribute up to $63 million to develop and construct all roads and utilities to the proposed site, he added.

LOC member Council Delegate Herman Daniels, Jr. (Shonto, Naa’tsis’Áán, Oljato, Ts’ah Bii Kin) asked where the $65 million would come from and if the project could cause harm to cultural and sacred sites.

Hale said the Escalade’s planning, approvals, design and construction would be fully compliant with the Navajo Nation Cultural Protection Act and there are no known sacred sites within Escalade’s boundaries.

LOC and Council Delegate Otto Tso said he has many issues with the project. He said the $65 million could be used for different priorities within the Nation and the Nation can find alternatives to gain revenue.

“Over 66,000 opposing comments are included in the legislation,” he said. “Personally, I oppose this project because it’s located within sacred ceremonial grounds. The location is home to Navajo deities and the backbone and foundation to all Navajo ceremonies. We need to protect our sacred grounds.”

Confluence Partners plans to have the master agreement approved in November 2017, if the Navajo Nation Council approves the bill and the Escalade project construction could begin in August 2018 and open in May 2020, Hale said.

“This proposed project is a gamble for the Nation and it does not reflect Navajo principles and values,” said LOC member and Council Delegate Edmund Yazzie. “We face the same scared site issues in New Mexico, such as Fort Wingate. We cannot allow this to open again. Pray that harmony and unity is restored in our Nation’s decision making.”

The Law and Order Committee voted 0-4 to oppose Legislation No. 0293-16, with one approved amendment and a directive for Confluence Partners L.L.C. to provide a written report addressing the committee’s concerns. The legislation moves forward to the Resources and Development Committee for consideration, and the Navajo Nation Council serves as the final authority on the bill.