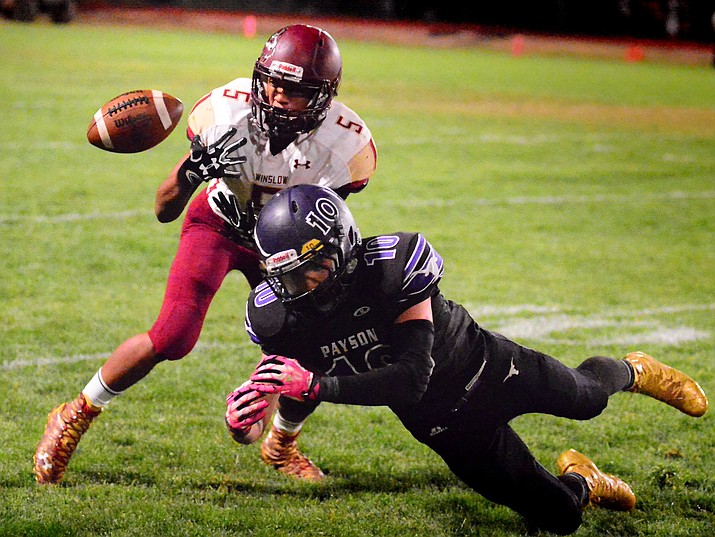 The Payson Longhorns defeated the Winslow Bulldogs Oct. 14 in Payson, dropping the Bulldogs record to 5-3 and possibly ending Winslow’s chances for the playoffs. An incomplete pass flies into the air between a Bulldog and Longhorn. Photo/Todd Roth 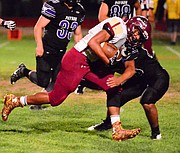 A helicopter delievered the game ball and dignataries to the Homecoming game in Payson. The Payson Longhorns defeated the Winslow Bulldogs 48-19 Oct. 14. Todd Roth/NHO

WINSLOW, Ariz. — The Payson Longhorns defeated the Winslow Bulldogs 48-19 Oct. 14 in Payson in their Homecoming game. The win improved Payson’s record to 3-5 for the season and dropped Winslow’s to 5-3.

The game could not have started worse for the Bulldogs. They received the opening kickoff but fumbled. The ball was recovered by Angel Jaquez who returned it 30 yards for a touchdown. Kenny Ayers booted the conversion for a 7-0 Payson lead.

The bad start continued when a bad snap on a punt attempt gave Payson the ball on the Winslow nine-yard line. J.T. Dolonitz ran five yards for the touchdown and Ayres converted to increase the lead to 14-0 early in the first quarter.

Payson drove 80 yards on their next possession and quarterback Ryan Rickey ran the final two yards for the touchdown. The snap on the conversion was bad, but Ayres ran for the two-point conversion for a 22-0 lead at the end of the first quarter.

Winslow got a break with about four minutes left in the first half, when Payson lost a fumble on a punt. Winslow scored on a six-yard pass from Junior Villanueva to Mikel Bonner. Damon Avelar converted to cut the Payson lead to 29-7 with less than a minute left to play.

Payson got a 54-yard run for the last score of the first half. The conversion kick was blocked and Payson had a 35-7 lead at the half.

Payson drove 67 yards on their first possession of the second half and scored on an eight-yard pass from Randy Ricky to Dailin Keith for the touchdown. The conversion failed and Payson led 41-7.

The Longhorns went 53 yards to score on their next possession on a 53-yard pass Randy Ricky to Dolonitz. The conversion increased the lead to 48-7.

Winslow scored on its next possession on a 48-yard pass from Villanueva to Yoann Diassa. The conversion failed but Payson’s lead was cut to 48-13.

The third quarter ended with Payson leading 48-13, but Winslow driving inside the Payson 20-yard line. Payson held and took the ball on downs at the Payson 12 yard line.

Winslow drove 67 yards and scored on a nine-yard run by Bonner. The two point conversion attempt failed but Payson’s lead was cut to 48-19 with under five minutes left to play.

The Longhorns ran out the clock on their final possession and walked off with a 48-19 victory. The loss may have ended or done serious damage to Winslow’s playoff hopes.

Winslow will host the Holbrook Roadrunners in their last regular season home game on Friday.