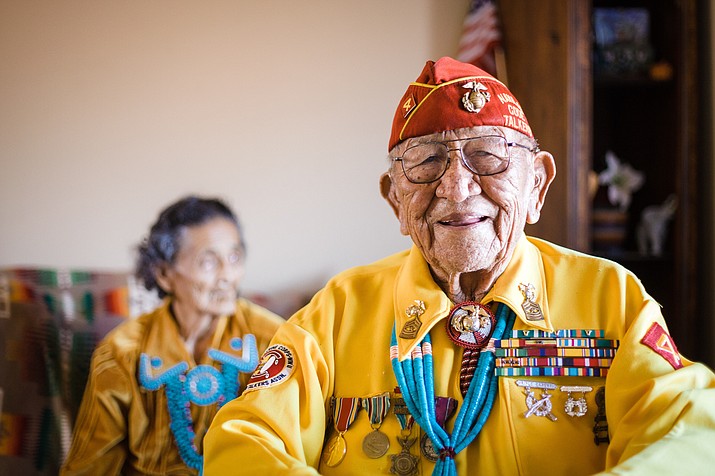 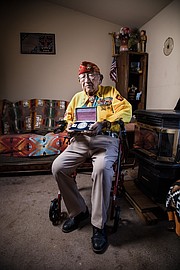 The Navajo Office of the President and Vice President mourned Akee’s passing.

“Dan Akee was not just a Navajo Nation treasure,” Navajo Nation President Russell Begaye said. “He was an international treasure and icon whose service will stand as a testament to the freedom of all Americans.”

Akee joined the Armed Forces when he heard they were recruiting Navajos. He became a member of the Code Talker team attached to the 4th Marine Division of the 25th Regiment. He took part in conflicts on four Pacific islands, most notably Iwo Jima.

Akee’s son said that his father was in the Battle of Iwo Jima when six Marines, including Gila River Indian Community member Ira Hayes, raised the U.S. flag atop Mount Suribachi.

Last year, on his birthday, Akee’s wish was to return to a house he built 60 years ago in Tuba City, Arizona. On Feb. 6, 2015 his wish came true, thanks to Red Feather Development Group, a nonprofit with offices in Flagstaff, Arizona and Bozeman, Montana. The group partners with Native American communities to develop and implement sustainable solutions to the housing needs in their communities.

Red Feather spearheaded the project with the help of the Western Agency of Navajo Veterans Affairs to renovate the home, which was in dire need of repair. The complete renovation included replacing the roof, windows, exterior doors, electric head, insulation, a complete bathroom overall, drywall, wheelchair access ramp, flooring, painting the exterior and interior, cabinets, plumbing, appliances, gutters and a porch. The entire house needed to be accessible because Akee was in a wheelchair.

In an emotional homecoming, in front of volunteers and family who made the day possible, Navajo Nation President Russell Begaye wheeled Akee into the living room of his renovated house. He had spent the previous two days in the hospital with pneumonia.

“We gutted the bathroom, removed the appliances, replaced windows and window frames and tore down walls,” Begaye said. “With the help of local volunteer groups, Red Feather Development and the Tuba City Veterans Office, we were able to renovate his home from top to bottom.”

The president said it was an honor to assist Akee. He also said that Akee rode with the Office of the President and Vice President’s staff during this year’s Navajo Nation and Northern Navajo Nation fair parades.

Akee Jr., who is a board member of Code Talkers Association, said that he and his siblings would like to thank their father for his service to the United States.

“My father always told us to be proud of speaking the Navajo language,” he said. “Always be careful of the words you speak as they are sacred, he would warn us.”

Vice President Jonathan Nez said he was saddened to learn about the passing of Dan Akee, Sr., but commended his service to the Marines as a Navajo Code Talker.

“Our Navajo Code Talkers, including Dan Akee, defended the United States against the interception of critical information and strategies by encoding messages into the Navajo language,” Nez said. “This code was never broken and is a great part of the proud history of our people,” he said.

Begaye and Nez called on the Navajo people to keep the Akee family in their prayers and sent their condolences to the family.

“He helped to move the nation forward and as such, we grieve the loss of our Navajo Code Talker,” Begaye said. “We send our deepest condolences to his family and we will order all flags to be flown at half-staff on the day of his funeral.”