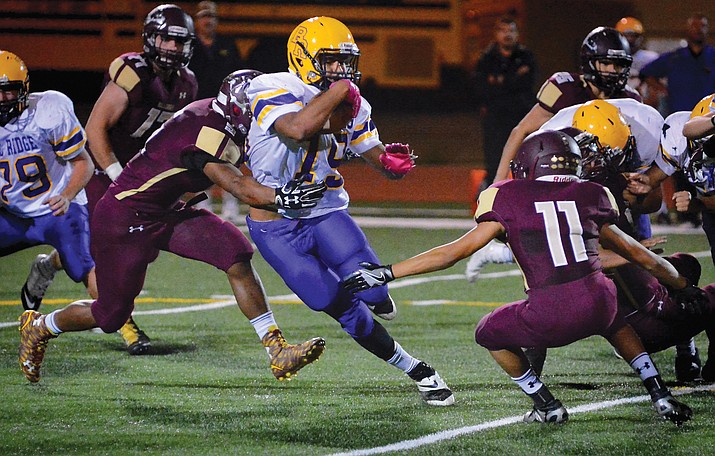 The win improved Winslow’s record to 5-2 for the season and dropped Blue Ridge’s to 2-5.

Blue Ridge came in enduring one of the worst seasons in their history but played well and nearly escaped with an upset victory. Winslow needed a late touchdown and a two-point conversion to get the win. The Yellowjackets were hurt by injuries to key players as well.

The Yellowjackets made an impressive long drive at the end of the first quarter driving 68 yards in 15 plays and using over six minutes of the clock. Quarterback Spencer Wilkening ran the final seven yards for the score and Nick Jones booted the conversion for a 7-0 lead with less than a minute left in the quarter.

The second quarter was scoreless but Winslow drove to the Blue Ridge goal line before losing the ball on a fumble with just seconds to go. Winslow had an important pass interception by Preston Betoney.

Blue Ridge lost quarterback Spencer Wilkening, who left in an ambulance at the end of the first half. His substitute, Nick Jones, was injured early in the third quarter although he came back in the final period.

Winslow got a 46-yard run by quarterback Junior Villanueva to set up the game-winning touchdown. He passed the final six yards to Damon Avelar and then passed to Titus Russell for the two-point conversion that gave the Bulldogs an 8-7 lead.

Blue Ridge drove to inside the Winslow 30-yard line but were stopped there and the Bulldogs walked off with a hard-fought victory.

The Bulldogs will journey to Payson on Friday to meet the Payson Longhorns. Payson fell to Snowflake 26-21 but gave the Lobos a much closer game than the Bulldogs did in their game at Snowflake.