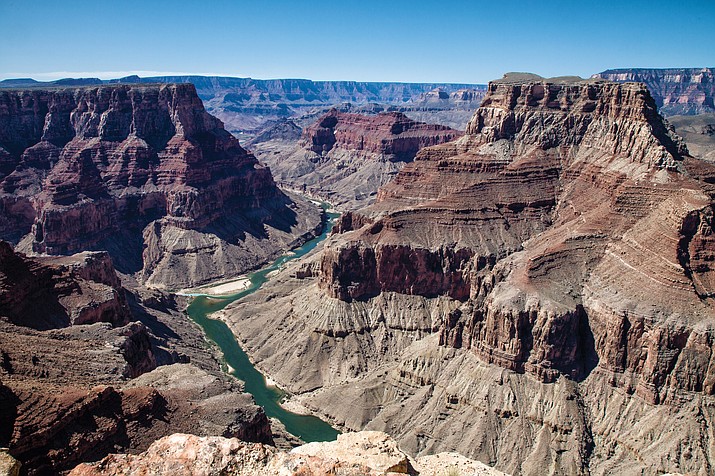 The Confluence, where the Little Colorado and Colorado Rivers meet. The area is considered sacred to many Native American tribes and is the site of a proposed 420-acre development by Confluence Partners, LLC.

KYKOTSMOVI Ariz. — The Hopi Tribe told the Navajo Nation Council that the proposed Escalade development violates the intergovernmental compact between the two tribes and that the development would damage Hopi religious sites.

“The proposed Grand Canyon Escalade, with a gondola tramway into the revered Grand Canyon, would irreversibly comprise the tranquility and sacredness of areas the Hopi Tribe has

The Navajo Nation is considering whether to support and join in financing a 420-acre tourist attraction and resort near the confluence of the Colorado and Little Colorado Rivers. Navajo Nation Council Delegate Benjamin Bennett introduced legislation Aug. 29 requiring the Navajo Nation to pay at least $65 million for infrastructure costs.

“For over a thousand years, Hopi pilgrimages have been taken into the canyon as part of a ritual initiation for our young men,” explained Leigh Kuwanwisiwma, director of the Hopi Cultural Preservation Office. “They gather salt from the Grand Canyon as part of the initiation ceremony. We continue to go to the Confluence for prayer offerings and ceremonial smoking.”

The Hopi Tribe is asking the Navajo Nation Council not to put the anticipated revenue from the project proposed by Scottsdale developer, Confluence Partners, LLC., ahead of sacred cultural beliefs.

“The Hopi Tribe and many other southwestern tribes, including the Navajo Nation, hold the Grand Canyon as a sacred place of reverence, respect and conservation stewardship,” Honanie said in the letter. “It is important to preserve and protect these sites from hard and wrongful exploitation.”

Honanie said that that the proposed development of the Grand Canyon is a violation of the Intergovernmental Compact entered into between the Navajo and Hopi tribes in 2006.

The compact says, “The Navajo and Hopi people are and shall remain neighbors, and desire to live in harmony with mutual respect for each other for all future generations. One important aspect of such mutual respect is consideration for the religious beliefs and practices of the other.”

The Navajo Nation’s approval of this proposal will violate the intergovernmental agreement and reignite litigation,” Honanie said. “The Hopi people are committed to carrying out our world stewardship for all living things and have a significant responsibility to respectfully care for these special places and to transmit traditional knowledge about these places to the coming generations of Hopis. The Grand Canyon Escalade project will irreversibly compromise the tranquility and sacredness of all the surrounding development area.”

Kuwanwisiwma added that the gondolas on either side of the confluence would go over the top of sites used for sacred ceremonies, that construction of the Escalade would destroy Hopi sites and that a resort — with all that implies, including liquor and tourist excursions — would forever change what is supposed to be a place of tranquility and reverence.

Some religious shrines and culturally important agave plants already have been destroyed in pre-development visits by the development team to the sites, Kuwanwisiwma said, adding the fragile environment would be compromised.

“The Grand Canyon at the Confluence is the Hopi’s final spiritual destiny, where our spirits travel to reside,” he said. “When I go there and look into the canyon, the Hopi vision is that our spiritual people are there.”