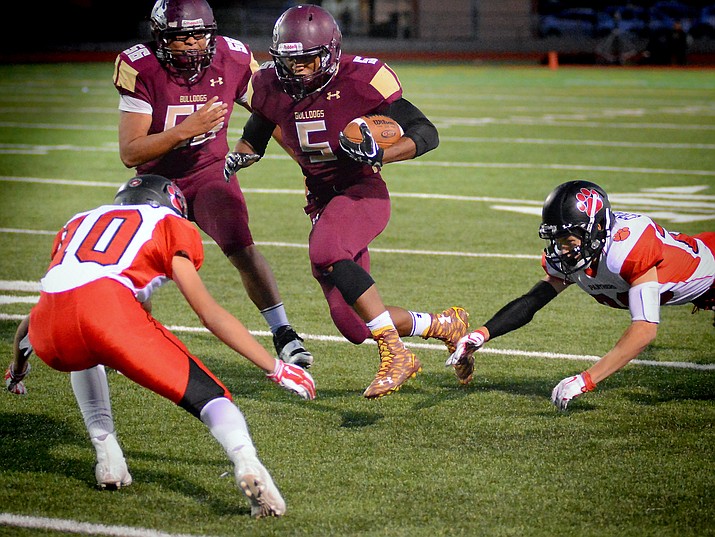 Winslow Bulldog Mikel Bonner is loose and moving against the Coconino Panthers Sept. 23. The Bulldogs won the game 50-13. Todd RothNHO

WINSLOW, Ariz. — The Winslow Bulldogs defeated the Coconino Panthers 50-13 in their Homecoming Game Sept. 23. The win improved Winslow’s record to s 4-1 for the season and dropped Coconino’s to 2-3. The game was played with high winds for teams who feature passing attacks.

The Bulldogs allowed a touchdown early but took command and were in control for most of the rest of the game. The win was Winslow’s fourth straight but they faced their toughest opponent yet Sept. 27 in Snowflake against the undefeated Lobos.

The Panthers drove 66 yards to score on their opening possession. Ty Furr ran 34 yards for the touchdown and booted the conversion for a 7-0 lead.

After a couple of punt exchanges the Bulldogs tied to score 7-7 with Junior Villanueva running the final yard and Damon Avelar booting the conversion with just over three minutes left in the first quarter. The Bulldogs drove 69 yards for the score.

Ahli Foster intercepted a Coconino pass to give the Bulldogs good field possession. The Bulldogs took advantage of the situation and Mikel Bonner ran five yards for the touchdown. Avelar converted to give Winslow a 14-7 lead with just under a minute left in the quarter. That was the score at the end of the quarter.

The Bulldogs drove 62 yards to get the first score of the second quarter on a two yard run by Avelar. The conversion failed and Winslow led 20-7 with most just over eight minutes left in the half.

Freshman Yoann Diassa had a 50 yard punt return for a touchdown erased by a penalty. Coconino held and stopped a fourth and one play to take the ball on downs. The Panthers drove to the Winslow 20-yard line where the Bulldogs held and took the ball on downs.

The Bulldogs drove 80 yards and Bonner scored on a 24-yard run for the touchdown and caught a two-point conversion pass to give the Bulldogs a 28-7 lead with less than a minute left in the first half. That was the score at intermission.

The Bulldogs took the second half kickoff and scored on an eight yard run by Nick Reyes. Villanueva passed to Noah Upchurch for the two-point conversion and a 36-7 lead with about eight minutes left in the third quarter.

The third quarter ended with Winslow leading 36-7 and driving in Coconino territory.

Avelar ran three yards for the touchdown and booted the conversion that increased Winslow’s lead to 43-7 with most of the fourth quarter left to play.

Furr returned the kickoff 79 yards for the touchdown. The conversion failed and Winslow still had a comfortable 43-13 lead.

Avelar ran 21 yards and booted the conversion that increased Winslow’s lead to 50-13 with still over nine minutes left to play.