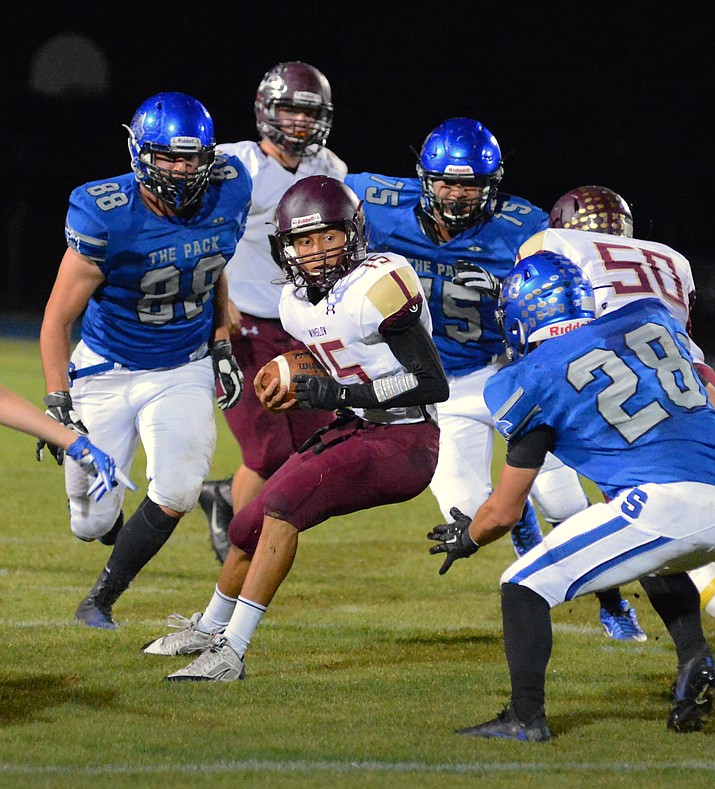 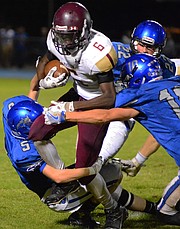 Yoann Djassa wades through a wolf pack in the Bulldogs loss to Snowflake Sept. 30 in Snowflake, Arizona. Todd Roth/NHO

SNOWFLAKE, Ariz. — The Snowflake Lobos defeated the Winslow Bulldogs 48-0 in Snowflake Sept. 30 to remain undefeated. The win improved Snowflake’s record to a perfect 6-0 for the season and dropped Winslow’s to 4-2.

The Lobos drove 53 yards on their first possession and scored on a 26-yard run by Teagan Peterson, who then booted the conversion for a 7-0 lead with over eight and a half minutes left in the first quarter.

Snowflake drove 95 yards to score on their second possession. Zach Solomon ran eight yards for the touchdown, which was set up by a couple of long runs by Solomon and a long pass from Trey Schneider. Peterson converted to increase the lead to 14-0 with about four minutes left in the quarter

Steven Brimhall intercepted a Winslow pass and returned it to the Winslow 17 from where Schneider passed to Tanner Willis for the touchdown. The conversion failed and Snowflake led 20-0 with just over two minutes left in the first quarter.

The first quarter ended with the Lobos leading 20-0 and having just recovered a Winslow fumble near midfield. Winslow recovered a Snowflake fumble at the Winslow 40-yard line. A bad snap over the Winslow punter’s head gave the Lobos the ball on Winslow’s 15-yard line.

The Lobos scored on a 15-yard pass from Trey Schneider to J. T. Tate. Peterson converted to increase the Snowflake lead to 27-0 with about nine minutes left in the first half.

Snowflake recovered another Winslow fumble in Winslow territory. Schneider passed 17 yards to Trenton Hatch for the touchdown. Peterson converted to increase the Snowflake lead to a commanding 34-0 with still nearly six minutes left in the half.

The Lobos got the ball back and drove into Winslow territory. The Lobos scored on the last play of the first half on a 40-yard pass from Traegan Standerfer to Peterson on a screen pass. Peterson then converted to give the Lobos a 41-0 halftime lead.

Winslow drove to the Snowflake 15-yard line where they lost the ball on downs after an incomplete fourth down pass. It was the first real scoring opportunity for the Bulldogs.

The Lobos scored for the first time in the second half on a 56 yard run by Peterson who then converted to increase the lead to 48-0 with just four minutes left in the game.

Snowflake totally dominated the first half. A couple of injuries slowed the Lobos in the second half but they kept control and their defense kept the Winslow offense from any success

Snowflake will host the Payson Longhorns on Friday with hopes to continue their undefeated season. Payson lost to undefeated Show Low 43-34 in a surprisingly close game. The loss left the Longhorns with a 2-4 record.