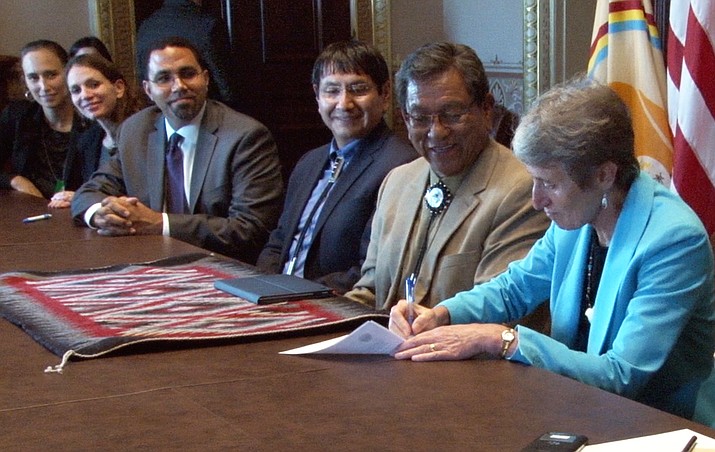 WASHINGTON — Federal officials signed an agreement with Navajo leaders Sept. 27 giving the tribe the authority to implement a single set of standards, assessments and accountability measures for tribal schools that are scattered over three states.

Before the agreement between Navajo officials and the secretaries of Education and the Interior, the tribe’s 66 Bureau of Indian Education-funded schools were subject to regulation by Arizona, New Mexico, Utah or the BIE.

“You’re not dealing with the complexities of three different states and three different sets of rules as you take on how to instill a great education … that honors the rich culture and language of the Navajo Nation,” Interior Secretary Sally Jewell said at the signing ceremony.

Jewell said that has not always been the “case over the hundreds of years of education that was done to you, as opposed to with you.”

Navajo President Russell Begaye said the agreement will allow the Navajo Nation to set its own curricula, standards and assessments, which he said will be focused on the Navajo language and culture.

“We have been wanting to do this for quite a number of years because we have the capacity to become a state-level education system,” Begaye said.

The Navajo agreement was one of three announced by the U.S. Department of Education Sept. 27, which also released $24.9 million for tribal education projects and spelled out rules for districts that oversee schools with a student body that is half or more Native American.

Under the Every Student Succeeds Act, which takes effect next school year, such school districts will be required to enter into formal partnerships with the Native American community to ensure the educational and cultural needs of tribal students are being met.

“A lot of these schools are in rural areas, which presents a lot of different challenges, but we look forward to work ing with all of the schools and communities within the state to see how we can help their students,” said Charles Tack, a spokesman for the Arizona Department of Education.

Indian Wells Elementary School in northern Arizona is 100 percent Navajo but is part of the Holbrook Unified School District, which Superintendent Robbie Koerperich said Tuesday has a plan for partnering with the Navajo.

“The main thing we would like to focus on in the Holbrook school district would be community partnerships to increase parental involvement, improve college and career readiness, develop cultural identities and continue to help kids graduate,” Koerperich said.

Federal officials also announced Tuesday that Northern Arizona University and the University of Arizona will receive a total of $388,991 to assist in professional development and support for their Native American students.

Navajo leaders said all these moves will support tribal students and make amends for years when tribal language and culture was stifled and Native American students were not given quality educational opportunities.