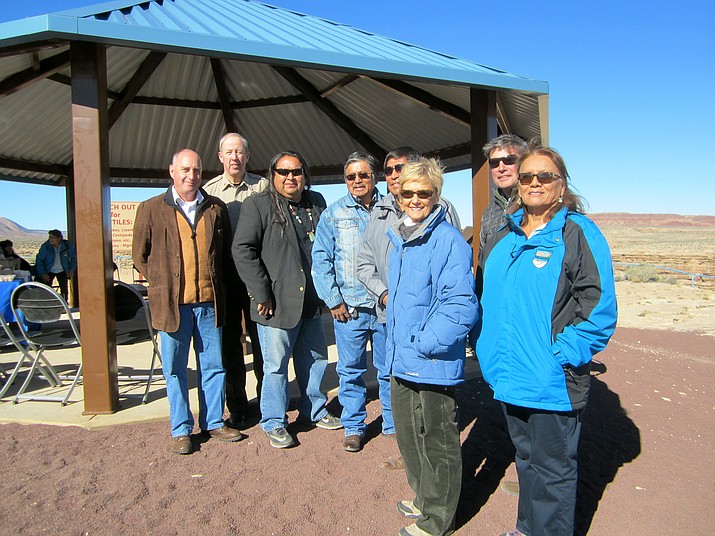 The site does include a fee station. The tribal park also includes arts and crafts stands, where Navao vendors sell their handmade crafts.

The Little Colorado River gorge lies in the western portion of the Navajo Nation, adjacent to the eastern boundary of Grand Canyon National Park. It is one of the largest tributaries of the Grand Canyon and forms a steep and narrow gorge that runs 45 miles along the Painted Desert.

Shadow Mountain is viewpoint 1, where the dedication took place and is near milepost 286 on Highway 64. Viewpoint 2 is called Hoyee’ Adeetiin and is free and open to the public. There are hiking trails, picnic tables and vending.

It now includes a ramada, which is shaped like a Hogan and is orientated to the east. The floor features a concrete stamp that includes four sacred Navajo plants. The interpretive panels and botanical signs include information on northern Arizona and Navajo culture, and were made in consultation with the people of the Cameron Chapter.

Jeff Stein, project manager for Coconino Parks and Recreation Department, said he was sad to see the project come to an end only because through the work everyone involved had become family.

The distinction between a gorge and a canyon, according to Tso, is that a gorge is deeper than it is wide and a canyon is wider than it is deep. He said someday he would like to see a trail along the rim that would run all the way to Grand Canyon National Park.

In addition to the Little Colorado Overlook, two other Navajo Nation sites, Antelope Canyon near Page and Grand Falls near Leupp, have also been upgraded with new interpretive panels and ramadas. The three sites are part of the Coconino Parks and Open Spaces (CPOS) initiative established in 2002.