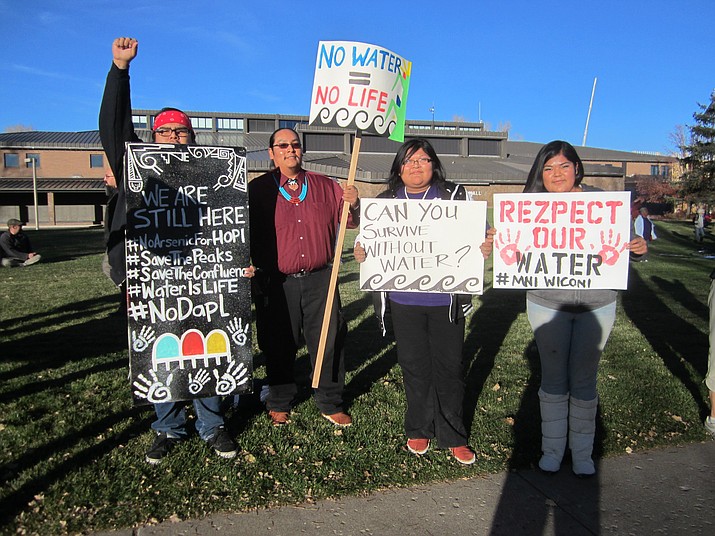 Hopi tribal members come out in support of Standing Rock Nov. 15 in Flagstaff in a nationwide day of action to protest the Dakota Access Pipeline in North Dakota. Photo/Katherine Locke

The Office of the President and Vice President (OPVP) recently learned that a peaceful protest on Nov. 20, staged by residents from the Oceti Sakowin and Sacred Stone Camps came to a violent end when demonstrators tried to remove road barricades.

The Morton County Sheriff’s Department along with the State of North Dakota barricaded a highway that endangered residents by obstructing emergency services from accessing a critical highway.

During a peaceful demonstration that was held at night, the police sprayed demonstrators with three water cannons in subfreezing temperatures that were reported to have reached 22 Farenheit.

It has been reported that a young woman was struck with a concussion grenade that exploded on her arm.

“The extent of military force and the violent repercussions suffered by residents and demonstrators is uncalled for and excessive, to say the least,” Begaye said. “We are calling upon President Obama to take expedient action on this issue and permanently halt any further construction on the Dakota Access Pipeline in support of the Standing Rock Sioux Tribe and in recognition of the tribe’s dispossessions to the land and the importance of Lake Oahe to the Tribe.”

The president is also asking the Morton County Sheriff’s Department to consider the repercussions of their excessively forceful actions and the violence they are perpetuating.

The OPVP has previously issued a letter in support of the Standing Rock Sioux Tribe and both Begaye and Nez have visited the camps at Cannon Ball, North Dakota. They have also spoken with Standing Rock Sioux Chairman Dave Archambault II about the Dakota Access Pipeline several times.

Nez said the Obama administration cannot sit back in light of recent violence inflicted upon Native Americans in North Dakota. He said Obama must put an end to the Dakota Access Pipeline construction because the lives of Native American people hang in the balance.

“An overzealous military police force is utilizing chemical warfare against peaceful Native protesters. Why is this legacy of oppression and violence continuing in this day and age?” he asked. The Morton County Sheriff’s Department use of water cannons to spray protesters with mace laced water during subzero temperatures is not only unjust, but a reflection of the racial tensions boiling over throughout the United States.”

Nez added that Indian Health Services must be honest about the injuries they are treating and share this information with the Obama administration and the media.

“These types of injuries only occur on the battlefield during war or during violent criminal acts,” Nez said. “People are going to die if no action is taken. It’s imperative that we do something before the Trump administration takes office.”