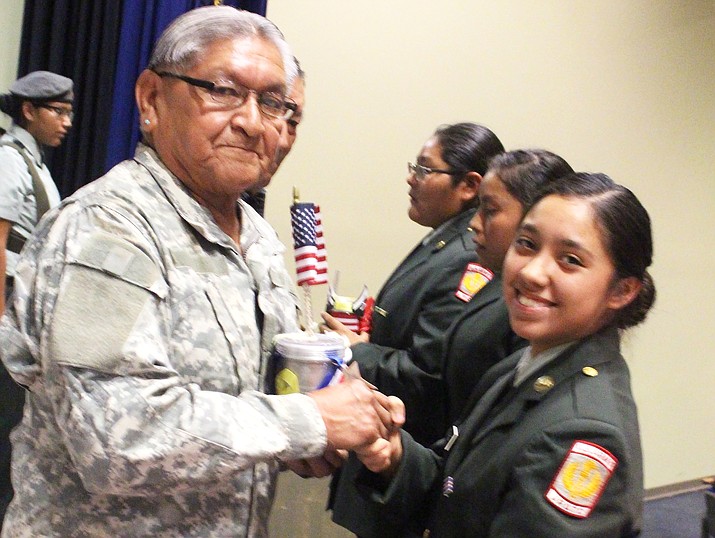 This is the second year for the event, which was created by Hopi High Junior ROTC instructor Sgt. Joe Deleon. Seventeen cadets served as presenters to the 17 staff members. Five Junior ROTC members provided the color guard and five other cadets worked with the military flags.

The 17 staff members all received jackets from teacher Romancita Adams.

Sgt. Deleon said the event went well and that it was important to acknowledge those from Hopi Jr/Sr High School who had served.

“The staff members who received items were happy and felt blessed,” he said. “There was emotional joy for the veterans and the cadets.”

Sgt. Deleon noted that some of the veteran staff members did not attend because of work conflicts; however, they were still acknowledged. He praised Adams for helping and teacher Carol Sieweyumptewa for coordinating the fitness challenge that followed the ceremony.

He said the event turned out better than planned because of the willingness to participate both by the staff and the cadets. He said the administration was also supportive.

Deleon said the teachers were impressed with the performance, attitude and integrity of the Junior ROTC cadets.

“The student body was impressed because they didn’t’ realize who walks the halls here as veterans,” he said. “The cadets said this hit home emotionally because it brought new light to honoring and supporting those in the program.”

Hopi High Junior ROTC lead instructor Major James Cox said he was impressed and grateful for everybody who contributed to the program. Sgt. Deleon said it’s always an honor to be the instructor of the cadets.

“I was proud of how they carried it off,” he said.

The 17 cadets created individual cups to give to the veterans. The cups had flags, confetti and candy in them. Each of these cadets was assigned to a veteran and gave them the cups as a token for their service.

Secakuku said the teachers liked what the cadets did for them and it showed that Junior ROTC does a lot for the school.

“I also liked the event challenge. It was a fun run and walk,” he said.