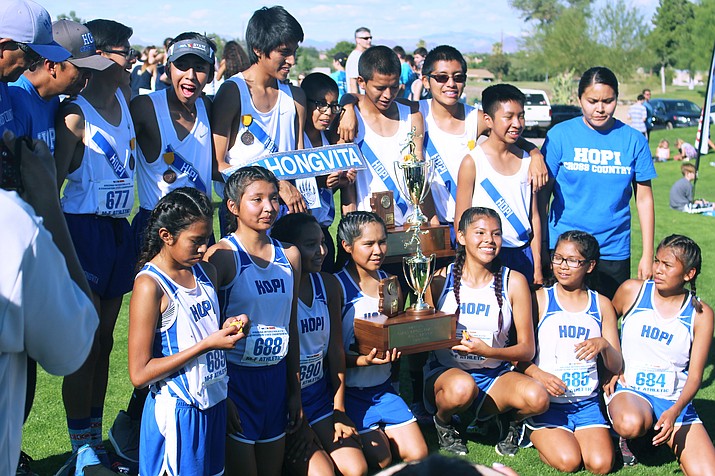 Hopi High girls show they are ready at the starting line. Photo/Stan Bindell

PHOENIX — The Legend continues to grow. Hopi High School Coach Rick Baker has been tagged with the nickname of The Legend after leading the Bruins to a national and state record 26 straight boys championships.

Make that 27 consecutive state titles after winning another trophy Nov. 5 at Cave Creek Golf Course in Phoenix. Adding to the folklore, Baker took over the girls cross-country team this season and led the young upstarts to a second place finish at state.

The Hopi High girls grabbed second place at the Divison 4 Arizona State Cross Country Meet in spite of three girls getting kicked off the team for violating team rules.

Both teams had to overcome obstacles. The Hopi High boys lost their top runner to academic ineligibility, but still won state. Despite losing three girls for rule violations, the girls finished a strong second at state.

“It was great to win state again,” Baker said. “This is great for the kids and the program.”

Baker said the Hopi High runners ran to their potential.

“We kept the team concept and the kids ran with heart of a champion,” he said.

The temperature ran into the mid-80s, but the coach felt the runners were prepared because they ran throughout the summer.

Baker praised Andre Dennis, who was Hopi’s third runner throughout the year but finished as their best runner on the day, coming in fourth overall. Baker said the top five Hopi High runners were outstanding.

“We’ll have a young team next year, but we’ll be competitive,” he said.

Andre Dennis, who placed fourth for the Bruins, said it felt great winning state because it was Hopi High’s 27th straight and they were happy to carry on the tradition. Dennis said he ran to his potential because he was nervous and didn’t want to be on the team that lost the streak.

“We all ran to our potential because we were anxious that we didn’t want to be the team that broke the streak,” he said.

Dennis, a senior, said the best part of the race was coming in as Hopi High’s top runner. However, he said all of his teammates ran well.

“The hot weather and the elevation got to me so I was exhausted at the end. Pinon gave me a challenge with their top three runners,” he said.

“They were loud and we had to work for their support,” he said. “There were lots and lots of fans there from Hopi.”

Dennis said he kept his grades up throughout the season by turning everything in on time. He plans to go to Northern Arizona University and hopes to get a cross country scholarship. But for now he’s focused on the state championship.

“We did it. We brought the trophy home again,” he said.

“I trained for this all year,” he said. “The team ran to their potential because we trained all year.”

Laban said his favorite part of the race was that it was fast-paced and it went by quickly. He said the team could have run better if they stuck together in more of a pack.

Laban said he got tired faster because it was hot. He said he stayed academically eligible by turning in his work and asking his teachers if he had any missing assignments.

“I’m glad there was a lot of fans there to support us,” he said.

Laban ran with some pain in his leg, but just put Icy Hot on it and worked his way through it.

“I was glad to run for Coach Baker because he’s a really good coach,” he said.

Steven Baker, the coach’s son, said he was proud to win state because the Bruins did everything that they needed to do to win. Baker said he had a hard time running to his potential because his legs were sore. He felt, like his teammates, that the Bruins ran at their best because of their training.

“I like that we got out there and got the win. We ran our best,” he said.

For the girls Maya Smith from Northland Prep was the individual state champ for the third year in a row. She came across the finish line in 18:21. The rest of the championship team included Nora Blodgett, ninth; Alana Minkler, 17th; Megan Bounds, 26th; Kate Bailey, 34th; Andrea Lopez, 46th; and Hannah Reidman, 138th in the 169 runner race.

Pinon finished second despite having the top three runners cross the finish line. Wesley Cook was the individual state champ with a time of 16:16. Teammates Tyrin Begay and Adriano Joe finished second and third.

“The girls ran the way they are capable of running,” he said. “We were knocking at the door. Next year we’ll knock the door down.”

Baker said the top three runners ran tough, but the fourth and fifth runners need to improve for next year.

“All the team’s runners were so spread out. Our fourth and fifth runners need to finish in the top 30,” he said.

Baker said all of the Hopi High runners were academically eligible and healthy except for Jaeda Honani battling a knee injury.

Baker said the runners were academically eligible throughout the season.

Lauryn Honwynewa, a sophomore, said she was surprised that the girls took second because they had to pull up all those runners from the junior varsity team. She felt she ran to her potential because she trained hard.

“Even our junior varsity runners were ready to go,” she said.

Honwynewa said the best part of the race was getting the trophy. She said the team could have done better if they ran in a pack. She said the fan support was great.

“It was excellent because they encouraged us to keep running and push our hardest,” he said.

Honwynewa said she stayed academically eligible by turning in her work on time and listening to her teachers.

Honwynewa said it was fun running for Coach Baker.

“He has new expectations and he expected a lot,” she said.

Honwynewa said the Lady Bruins will be shooting for the state championship next year.