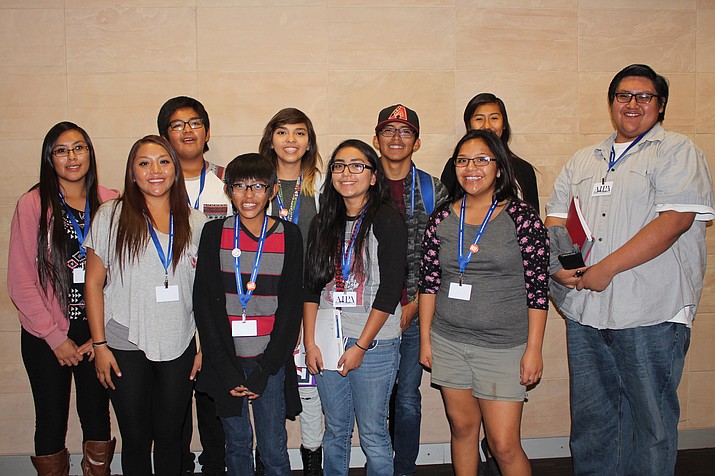 The awards are based on work done during last year’s school year, so the winners from Hopi High School have already moved on to college. Storm Tso, who is at the University of New Mexico, won two awards. Krienne “Crayon” Pahovama won one state award. They both also won radio awards at AIPA last year.

Tso, who is majoring in public communication and political science at UNM, said she was surprised that she won this year.

“I didn’t really feel that my pieces were that great when I first wrote them. But I’m still pretty happy about it,” she said.

Tso said she is proud of Pahovama for winning another state award.

“We have been in radio together from the beginning. We’ve seen each other grow. It’s great to see each other do great,” she said.

The Hopi High radio students are known for the Hopi High Teen Show, the only live remote Native American teen talk show in the nation. It goes out over KUYI, the largest wattage public Native American radio station in the continental 48 states. For the first time in more than 15 years, the program is on hold because KUYI is relocating.

Tso said her favorite part of the radio program was going to KUYI to broadcast. She also enjoyed going to state and national conferences to meet new people.

“I would really like to take radio while I’m here (at UNM) and be back on the air,” she said. “I really miss it. The best memories I have from radio are probably the field trips and interesting people that I got to interview.”

Her advice to incoming radio students at Hopi High is to take advantage of what’s out there.

“Everything is different off the reservation,” she said. “Things that the school is paying for, like conferences, we have to pay for ourselves. Network with all the people you meet at the conferences. It will really help you out in the long run. But most of all, take this class seriously. You have the opportunity to learn a lot... Take advantage of that because you can make a career out of it. Looking back, I could have done a lot more in that class. It doesn’t seem like it, but the school puts a lot of effort into getting you guys on the air, so be thankful.”

“I’ve never been afraid to talk to people or in front of crowds,” she said.

Ten media students from Hopi High attended AIPA as they learned from breakout sessions and listened to speakers.

“Yee thinks that high school students should have a voice and we should all be able to express our own opinions,” she said. “We should be allowed to tell stories that interest us.”

Yee is the first Asian American woman elected to serve in the state legislature and spoke about battling discrimination.

“She used that as an example that where you come from, your gender or who you are shouldn’t stop you from achieving your dreams,” Saufkie said. “She gave us girls and minorities hope that we can be successful in the work field.”

Saufkie is considering minoring in print journalism, but the conference also sparked an interest in video for her.

The Hopi High media students attended two sessions. Saufkie attended one session about “Extreme Editing” and another session on “Starting young shouldn’t be scary.” The presenter for the second session was Alexa Tieu, promotion producer for Fox Sports Arizona. She talked about starting her career when she was young.

Saufkie stepped out of her comfort zone for a video interview as she interviewed Scottsdale Community College graphic design teacher Rick Burress, who spoke about the difference between hearing and listening.

“I felt honored to interview him. His speech gave inspiration to many students because he talked about different styles of listening,” she said.

Elisa “Mouth” Caserez, editor of the Hopi High Bruin Times, noted that about 500 journalism students attended AIPA and that there were 32 presentations broken into two sessions. Her first session was about how to write sports stories, especially features. Her second session was about the rules of designing a newspaper and how to break those rules like an artist.

“When I went to the conference I saw fierce competition when it came to the journalism skills. This trip motivates me to encourage more Natives to enter the journalism field,” she said.

“I was nervous, but I was excited to do it because it was my first video interview. I was scared I wasn’t going to do it right,” she said. “I was scared but interested in what she had to say because she fought for high school journalism students and you wouldn’t think that’s something a state senator would do,” she said.

Kayaquaptewa said the conference was amazing because so many students were interested in radio, broadcast and journalism.

“I loved the feeling we got when we walked into the conference. There was a feeling that was outgoing, happy and involved students were all around,” she said.

Kayaquaptewa said the best part of the conference was going to different sessions to learn about different types of journalism. She learned about the different opportunities that are available for journalism students.

She also liked Burris’ speech about the difference between listening and hearing.

“He understood the generation we are in and included us in terms we could understand,” she said.

“I felt like a pretty good student attending an amazing journalism class and seeing my classmates winning three state awards. It was a good feeling reflecting on us upcoming students,” she said. “I’m going to attempt to try to win a state award next year.”

Kayquaptewa said this trip encourages her to do more with journalism and consider the different job opportunities in journalism.

Isaac Talas-Lomayaktewa, a freshman print journalism student, said the conference was amazing because he learned about sports journalism. His first session was “Sports Stories Beyond the Games” by Paul Coro and the second was “On the Record about Sports Journalism” by Chris Cole.

“They were interesting speakers. I loved how they discussed what they do in their job and how they got to their position,” he said.

Coro is an interviewer for a website and the senior writer for the Arizona Republic.

“I loved his speech and it inspired me to be a sports interviewer,” he said.

Janissa Lahaleon, a senior print journalism student, said the sessions were her favorite part of the conference. Her first session was “Extreme Editing” by Lisa Baker. Lahaleon said this session was interesting and informative. Her second session was “Starting Young shouldn’t be scary” by Tieu.

“She made the session fun and entertaining,” Lahaleon said.

“It motivated some of us to enter our work for awards for next year,” she said. “It was awesome that we won. I am proud of the two individuals who won from Hopi High.”

Lahaleon said this trip encourages her to do more with media and photography.

“It was fun taking pictures and capturing the moments,” she said.

Ronald Lopez, a junior print journalism student, said attending the sessions was fun. His sessions were about protecting student journalists and photographers of the future. He interviewed students from other schools in the Phoenix area.

“This made me think about journalism in my future. I’m thinking about getting a minor in journalism. Journalism is fun, but you have to keep up on all your work,” he said.

Lopez said it was awesome that students from Hopi High won awards “because we got to cheer for them.”

Kyle Secakuku, senior video student, spent much of the conference videotaping including Saufkie’s interview of Yee and Krista Koyaquaptewa’s interview of Rick Burress.

“I got to see many schools and learned a lot about journalism,” he said.

Secakuku said the best part was attending the sessions and seeing what careers were available. He said the conference would have been better if they had bigger rooms for the sessions. He said he had fun learning about photography in one of his sessions. He is considering taking video classes in college.

Polacca, who would like to minor in photography, said she is going to try to win a state award next year.

“I felt proud of our students,” he said.