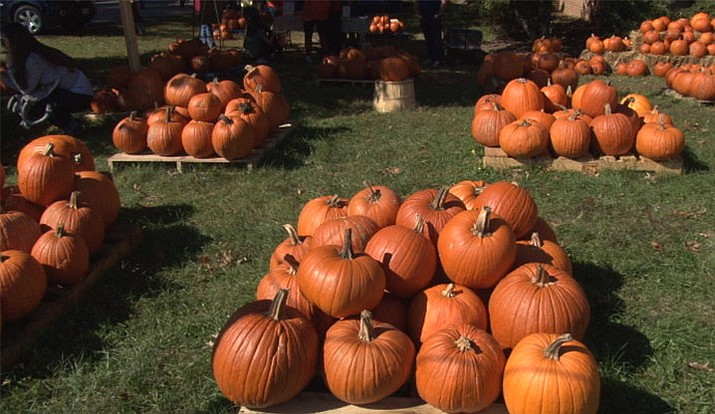 Pumpkin Patch Fundraisers grows pumpkins on land owned by the Navajo Agricultural Production Industry before shipping them for sale by hundreds of groups across the country. Photo/Sabella Scalise, Cronkite News

After a considerable amount of time checking his options, Tobin Coolbaugh, 6, holds up a pumpkin that traveled 2,000 miles from a Navajo farm in New Mexico to a church lot in Northern Virginia. Photo/Sabella Scalise, Cronkite News

On a recent Saturday, it involved a Superman costume, an hour in the inflatable bouncy house, and then repeatedly picking up and showing off possible choices in the church pumpkin patch —when the pumpkins weren’t rolling away from him.

Little did Tobin know, those pumpkins traveled 2,000 miles before they could be chased across the grass by a 6-year-old at St. George United Methodist Church in Fairfax.

The pumpkins in the running to be Tobin’s future jack-o-lantern were raised on Navajo Nation land and shipped here as part of a tribal program to create agricultural jobs in New Mexico.

“They are selling very well and people are excited to hear that they are supporting that effort and that mission with the Navajo Indians in New Mexico,” said the Rev. Steven Wells, pastor at St. George’s, of the pumpkins from Pumpkin Patch Fundraisers.

The company raises pumpkins on 12,000 acres of Navajo land, part of a 70,000-acre parcel owned and operated by the Navajo Agricultural Production Industry.

Pumpkin Patch Fundraisers was founded in North Carolina but was forced after Hurricane Hugo to move to New Mexico in 1991. It’s been there since, employing Navajo farmers year-round and as many as 700 Navajo laborers in the September to October harvest season.

The company sells pumpkins to civic groups, churches, scout troops and other organizations and splits the profits with them. It says it has more than 1,000 customers spread across the country.

On its website, the company says that because of the quality of Navajo farmland and “responsible agricultural practices,” the pumpkins are high quality.

“Just the size of them and the different variations … people have been very pleased with what they have been able to find,” said Lisa Copeland, a St. George’s church volunteer.

Wells said the pumpkins the church sells “are a little bit higher than you would pay at say at a Wal-Mart,” but that people don’t seem to mind the extra cost because of where the money goes.

Church volunteer Alice Edwards was surprised to find out where money from the St. George’s sales is going.

“We are providing jobs and returning revenue back into Navajo Nation,” said Charley, who said the Pumpkin Patch Fundraisers farm is just part of NAPI’s larger agricultural operation.

“There will always be a need for Navajo employment,” Charley said.

Shannon Coolbaugh said she came to St. George’s church exactly for that reason — even though son Tobin yelled, “I like it better than her!” as he lifted a pumpkin over his head.

“Most pumpkin patches are kind of marked up high for profit, it’s really nice to have one that gives back,” said Coolbaugh, before she was able to pull Tobin out of the bouncy house and get him to settle on a pumpkin out of more than 2,000 St.George’s trucked in from the Navajo Nation.

“We hope and pray that this will help to support the Navajo Nation and help to get them out of the situation which they are in,” Wells said.