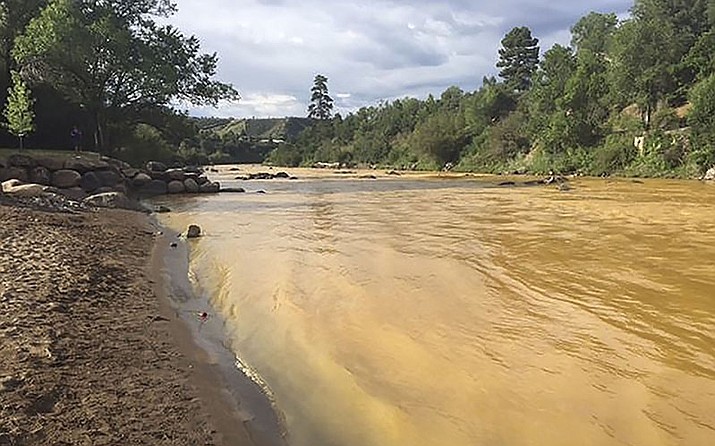 The Animas River ran yellow with toxin-tainted water last August after the accidental release of 3 million gallons of wastewater from the abandoned Gold King Mine near Durango, Colorado. Photo courtesy Colorado Parks and Wildlife Department

WASHINGTON — Lawmakers on Monday questioned the Justice Department’s decision not to prosecute officials in connection with the Gold King Mine spill, which dumped nearly 3 million gallons of toxins into the Animas River last year.

Congressional staffers learned in briefings last week that the Environmental Protection Agency’s Inspector General found violations of the Clean Water Act and the False Claims Act in its investigation of the incident, according to a letter from Sens. John McCain, R-Arizona, and John Barrasso, R-Wyoming, that described the meeting.

The findings were reportedly referred to the U.S. Attorney’s Office in Colorado, which said it would not pursue criminal charges but would instead let EPA managers to decide what administrative action should be taken, according to the senators’ letter.

“This is unacceptable” for a disaster called “the largest … of its kind since the Deepwater Horizon spill in the Gulf of Mexico,” said the letter to Attorney General Loretta Lynch and EPA Administrator Gina McCarthy.

“This decision shows that the federal government is not interested in holding itself to the same level of accountability to which it holds private companies when their negligence causes serious environmental damage and major economic harm,” they said.

Officials with both the EPA and the U.S. Attorney’s Office for Colorado declined to comment on the situation.

The Gold King spill was triggered in August 2015 when crews that were supposed to be cleaning up the abandoned mine in Silverton, Colorado, accidentally hit a mine tunnel, sending millions of gallons of mine wastewater into the Animas River.

The rupture spewed zinc, lead, iron, arsenic and other contaminants into the river, which eventually feeds into the San Juan and the Colorado rivers. The incident also turned the river a ghastly orange-yellow for miles.

The spill affected local residents and their water supply, including residents of the Navajo Nation, which filed a lawsuit against the EPA in August charging that the tribe’s water had been “poisoned with some of the worst contaminants known to man.”

“Given how much this catastrophe has devastated the lives and livelihoods of Native American tribes, including the Navajo Nation, someone needs to be held accountable and legally liable,” the senators said in their letter.

Rep. Ann Kirkpatrick, D-Flagstaff — whose district includes the Navajo Nation — said in an e-mailed statement that whoever is behind the spill should not be “let off the hook for the harm this contamination caused to the Navajo people, their water supply, livestock and qualify of life.”

But while the senators were urging prosecution, at least one environmental group said lawmakers and federal agencies should be focusing their attention on one thing: cleaning up the mess.

Sandy Bahr, the director of the Grand Canyon chapter of the Sierra Club, said the EPA’s classification of Gold King Mine as a Superfund site in September was an “important step in getting it cleaned.”

“They’re doing what they’re supposed to do,” Bahr said. “They’re moving forward. While Senator McCain wants to point fingers, maybe what really needs to happen is to get the mess cleaned up and that’s what they’re trying to do.”

Bahr said McCain is “trying to make EPA the villain and that’s one of the problems.”

“That’s what keeps agencies from taking that action earlier like they should,” she said.