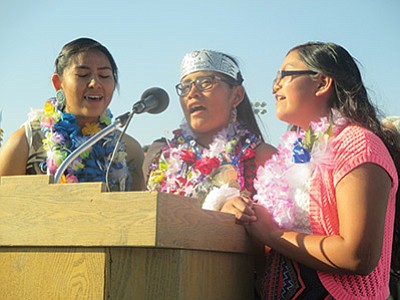 POLACCA, ARIZ.---Waylon Pahona Jr. was sexually abused as a child, but now he travels the world telling youth that they can make a difference and encouraging them to do something positive.

That was his message May 25 as he served as the keynote speaker at the Hopi Junior High promotion where 92 students were promoted in front of several hundred family members, friends and educators.

Pahona started his speech by asking the eighth grade students to turn around and yell 'thank you' to their parents in the audience. The students happily obliged.

Pahona said the students should use the gifts they received from the great creator every day. But, he added, there are 365 days in the year and nobody can live every day perfectly as they will suffer either heartache or family or friends' deaths. He told the students that eighth grade is just a starting point.

"You have to understand that you can make an impact," he said.

Pahona said he suffers from ADHD, but he can figure out problems without using paper, although his method might be messy. His point was that students can overcome obstacles.

His father passed away a couple months ago, but he remembers that his dad built the two ballfields at Hopi High because Pahona helped his dad construct those fields.

"His legacy is here and living on through me," he said. "I'm excited that I've been creating programs all around the world and this is the first time I'm speaking here."

Pahona stated that the promotion class' theme song is "One Man Can Change the World." He said this is appropriate because he believes this to be true.

He urged the parents to understand that what these youngsters hear is what they will take home. He said parents shouldn't be talking about how people are dressed at ceremonies, but about the beauty of the ceremonies.

The ceremony started with Hopi Junior High Principal Fernando Madrid praising his teaching staff, but also the transportation, cooking and facilities departments. He said the eighth grade promotion celebrates the hard work of the students starting with the use of their planners at the beginning of the school year and continuing with tentative steps. He said their promotion showed accountability and vigilance through trials and tribulations.

Madrid said the students also had magical moments and creative memories as they worked through the process and found success together. He said Hopi Junior High School's test scores outshined surrounding schools. He said teachers, who are often overlooked, deserved credit for that. He said teachers not only teach, but ensure student learning.

"We are inordinately proud of you," he told the eighth graders.

Madrid told the eighth graders that their future years should include empathy, compassion and a willingness to take a risk.

"We wish you everything you deserve," he said.

Joseph told her classmates that the Close Up trip to Washington D.C., her trip to the state fair with her art class and teacher Rita Keith telling her students every Friday that there should be "no sex, no alcohol and no drugs" are among her best memories of this school year.

Romalita Laban, a governing board member at Hopi Jr/Sr High School, said she has worked hard to eradicate violence. She said if there is just one person in a child's life who supports them that the child would be helped. She said she thanks any of the people in the audience who help children in those situations.

Laban noted that she is a graduate of Northern Arizona University and encourages students to go to college or vocational school.

"It's important that you believe in yourself," she told them.

Laban praised Valedictorian Alessandro Bolus for his work with National Junior Honor Society, Student Council, Gifted and Talented, Close Up and the Hopi Tewa Youth Council as well as cross country and track and field. He plans to attend Stanford to become an anesthesiologist.

Bolus, who is Filipino, recalled that when he was in the eighth grade that his family was getting ready to move to America when he locked himself in the closet. His mother told him that she was just going to leave him there without her or his brothers. This scared him enough that he opened the door and eventually found his way to Hopi.

Bolus said he wants to continue to be a child so he can have fun and be silly. He thanked Madrid and staff members for an awesome year that included a Pride program that gave students fun activity days. He also recalled a basketball tournament where the eighth grade beat the seventh grade. He thanked his classmates for making the last two years the best. He said the students had laughter and fun, but added that students still need structure and discipline from adults.

"We have teachers who love and care about us enough to say something," he said.

Bolus urged his classmates to not give into drugs, alcohol or social media drama.

"I am proud to be a Hopi-Filipino boy," he said. "Let's make the next four years the best."

This class will graduate in 2020. Bolus said 20/20 is perfect vision so this is a perfect class.

James Cruice, superintendent of Hopi Jr/Sr High School, told the students that during the summer they should play hard, stay up late, do their chores, develop relationships at home and come back in August ready to work because "We're waiting for you to return."