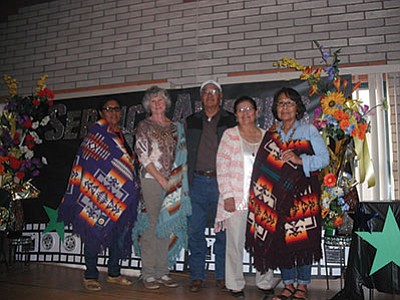 TUBA CITY, Ariz. - Tuba City Unified School District No. 15 took time out to honor and recognize the dedicated service of its employees, who serve and support the largest Native school district in northern Arizona.

The district has seven schools from K-12, including an alternative academy high school. The district's teachers, administrators and support services were all recognized with a special night of entertainment, live music and good food. A recognition, with the theme of "Hollywood Oscar Night" took place at the Tuba City Junior High cafeteria.

Nesmith had several of his beginning piano students play individual selections on an electric keyboard that was set up in front of the stage area. The musicians were warmly received by the crowd of employees and their families and the event was an opportunity for the students to play in front of a live audience.

Almquist showcased his guitar students along with live dance numbers with his students, who got to share what they have learned this past year in the classroom. Although the students were much younger than the junior high performers, the students showed confidence and willingness to share their pubic performance skills.

Recognition comes each year for long-time employees - 25 years and longer - and the retirees, who have put in more than 35 years of service with the district.

These retiree employees are honored with service plaques and Pendleton blankets, along with an opportunity to share reflections on their years of service and advice for newer employees on staying power and anecdotes on what they learned while in the district.

Delores Payne, science teacher retiree from Tuba City Junior High, said she wanted to thank everyone after the honor and privilege of teaching for the past 35 years and she felt lucky to have landed in Tuba City.

"I originally thought I would love to teach on a Navajo reservation, get an understanding about how I could use my teaching skills to help in a community," she said. "But then I fell in love with the people here and the students were so inspiring. This ended up becoming my home."

She said she did not have any big plans for retirement yet, although she thought she might go home and finally clean her house.

Harriet Sloan-Carter, former teacher and principal for TCUSD, said she would not say goodbye because she would return to Tuba City to pick up her mail. She had a message for new teachers about the impact they would and can have on students.

"My advice for you new teachers is that you are making memories for each student that goes here and is under your wing," she said. "It is so important to remember that you are making a life-long impression. It might just seem like another day to teach, but these kids will remember what you say to them. So encourage them, praise them, help them learn. This is one of the most important jobs you can ever do."

Alita Bowen, home liason for the district, said she is already enjoying her retirement and time with her family and grandchildren.

"It's going to be hard for me to leave Tuba City," she said. "I have been here for 46 years. I was originally born in Kaibeto, but they don't really know me there [because] I have been here so long. I leave you with the advice to take care of your health, walk and pray every day. Have love for your family and children."

TCUSD governing board members Mary Worker and Lee Tsingine were at the recognition dinner to congratulate and acknowledge their employees.

Tsingine, also a former principal from TCUSD and a current TCUSD board member, said he wanted to thank the employees.

"You're obviously committed and I commend that commitment to our students," he said. "One of the hardest jobs is to teach our kids and help educate them, help them grow. We want them to learn and understand the outside world so they can have better lives."

Additional employee honorees for 2016 were: