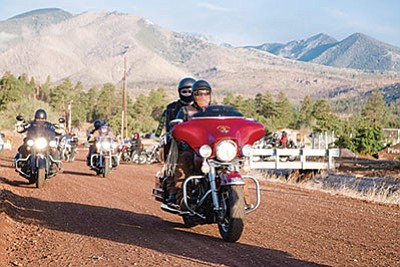 The Navajo Hopi Honor Riders leave the Piestewa House May 18. The group honors Native Americans serving in the military or killed in the line of duty. Ryan Williams/NHO

FLAGSTAFF, Ariz. - It was still dark outside with the early morning light barely breaking the nighttime sky. The only sound is a lone motorcycle, which is soon joined by others, rumbling from up the driveway of the Piestewa's family home.

Lori Piestewa is believed to be the first Native American killed in action after 9/11. Her family lived in Tuba City at the time but moved to Flagstaff, Arizona.

The Navajo Hopi Honor Riders are getting ready for a 140-mile trek from Flagstaff to Monument Valley on the second day of the 14th annual Honor Ride run around the Hopi and Navajo reservations.

The ride is in remembrance and a tribute to the communities and families of fallen soldiers and those with family members who currently serve.

Some of the riders are veterans themselves. Some are not. The riders are from all walks of life. On this morning, they are low key and quiet in the early morning light as they wipe their bikes down and make sure they have everything they need for the day's ride. Most seem focused on what the annual ride is about - making sure Native American veterans, those who fell in the line of duty and those who are still alive, are remembered and the families of those veterans are acknowledged and honored as well.

But Navajo Hopi Honor Riders have a larger mission that takes place throughout the year, every year. They escort soldiers home, both those who have passed away or those or are still alive - called funeral rides or welcome homes.

The funeral honor riders take veterans back to their original Navajo chapter or Hopi village area for burial, like the one that escorted Orrin Chimerica, the only Native American and only enrolled Hopi member to be post commander for the American Legion Post No. 3 in Flagstaff. Chimerica was a medic in the Navy who served six combat tours over 13 years. He suffered from post-traumatic stress disorder. He was escorted home to Moencopi on the Hopi Reservation Feb. 16, 2015 by the Navajo Hopi Honor Riders.

Larry Begay, the current president of the Navajo Hopi Honor Riders, a non-profit, all volunteer organization, said the Navajo Hopi Honor Riders formed after Piestewa was killed in action in March of 2003 during Iraqi Freedom. At that time, there were only a few riders who rode out from Window Rock to Tuba City. The riders spent a couple of days providing comfort and support to the family during a very difficult time.

"When they were leaving, Lori Piestewa's mother said, 'Now, don't let this be the only run, there's a lot more soldiers out there. Continue to support families until they all come home,'" Begay said. "That's what keeps everything going from year to year."

Begay believes the honor ride escort helps the healing process for those returning from war, especially for those who may have joined the service against their parents will because of a lack of jobs. Seeing the riders, families and community come together to welcome the soldier home can help ease their mind about what they have seen and had to do.

"That's where the healing starts," Begay said. "That is what we mainly want to do. It's supporting the family. It all depends on the family."

But the healing is not just for the families or the soldiers. The riders find comfort in welcoming home a comrade. Begay said he still gets choked up the last mile as the riders approach a home and knows a lot of the riders feel that way too. It is the reason why, time after time, they still go out on the requests.

Terry Lewis, a Vietnam veteran, who was getting his bike ready in the early morning for the ride May 18, echoed Begay's sentiment.

The Blue Star families currently have a family member serving. Gold Star families have had a soldier killed in action - and soldiers from the Navajo and Hopi reservation have been killed killed in action since 9/11 and a few more died as a result of injuries sustained during combat. The annual ride covers the Hopi and Navajo reservations visiting each community, with moments of silence for fallen soldiers. The ride brings communities together in support of veterans.

"Their families are the ones who we visit every year," Begay said, adding that there are veterans from previous wars in attendance at each stop, who are also thanked for their service. "Most of the major stops are for Gold Star families."

Another rider, Clarence Sharlow, is from Wisconsin. He said he heard about the honor riders from a friend and wanted to participate. He said while he is not a veteran he is a veteran of life - of alcohol and drugs. After many years of sobriety, he said the rides help him because it helps others.

"I know it helps to help other people," he said. "Something like this, to do things for other people."

Begay said as time goes on, support for a family that has lost a veteran drops off. The honor riders want to make sure support is still there year after year.

Even as the honor riders fulfill escort requests, about 85 a year for funerals and welcome home rides, they also, on their own, branch out and put up benefit runs and fundraisers for various situations. Some of the riders went to the funeral for Ashlynne Mike who was recently killed after being abducted on the Navajo Reservation.

As the day brightened May 18 and after a final group picture, the riders got on their bikes with little ceremony. They rolled out, their bikes rumbling in the quiet morning air, pulling away from the Piestewa's home down a dirt road, turning north onto Highway 89 on their way to Tuba City [see video] with a few cars following the procession of bikes.

"There is no way to really explain the feeling you get from the run until you've participated," Begay said, adding people can follow along in their cars, with the honor riders. "Everybody is welcome, you don't have to be on a motorcycle. It's open to everybody - to honor. Period."