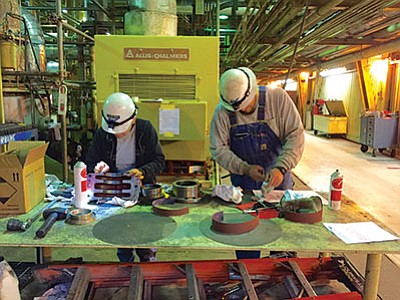 LECHEE, Ariz. - The 2016 overhaul of the Navajo Generating Station's (NGS) Unit 2 is complete despite an exceptionally rare interruption midway through that caused the plant's two other units to go offline simultaneously and required workers to help restore them.

On March 3, two 500kV power lines near Portland, Oregon, tripped. That caused a drop in 1,500 megawatts of generation in the Pacific Northwest, triggering what's called a "remedial action scheme."

NGS Units 1 and 3 automatically attempted to respond to the frequency drop and shut down as they are designed to do to prevent equipment damage. So plant managers decided to take advantage of the time to do some maintenance.

"It's pretty phenomenal," he said. "At one point we had close to 1,300 people out here working on the overhaul."

In a major overhaul, one of NGS's three 750-megawatt turbines and generator is completely disassembled, inspected, repaired where needed and reassembled to specification.

The boiler, boiler feed pumps, auxiliary turbines, precipitator and many dozens of other pieces of equipment are torn down to their essential components and rebuilt like new again.

All of the unit's instrumentation is recalibrated to ensure accuracy and precision. All ducts, fans, pumps, steam lines and valves are inspected and repaired to last until the next overhaul.

This year's overhaul saw the completion of about 14,400 individual tasks using 379,845 man-hours to do the work, Jones said.

NGS overhauls at this time of year provide a financial boost to the economies of Page, the surrounding Navajo communities, the northern Arizona-southern Utah region, and the hundreds of Navajo men and women who return to do the work.

More than 95 percent of the temporary workers hired by main contractor Zachry were Navajo.

"This would be my seventh year. Financially, it's very important," said Anthony Descheenie, a worker with Zachry Safety who is originally from Cornfields, Arizona. "Like all the other construction workers, I travel cross-country sometimes to look for work. I like it because it's Navajo preference, and that's good for my people here."

Each winter, NGS completes either a major eight-week-long or minor four-week-long overhaul on one generating unit and all of the systems involved in its operation. The plant is currently in a three-year cycle of major overhauls.

"The reason we do overhauls is simple, really," Jones said. "These units run 24/7/365. Many of the systems we cannot take out of service and perform maintenance when in operation. The only time we can do it is when the unit is offline."

The best example, he said, are the plant's boilers that produce steam and the turbines that help make power.

"In a major (overhaul), we disassemble the turbine down to the half shell, remove all the rotors, all the diaphragms, and repair the entire steam path to return the efficiency back to the machine," Jones said.

This kind of maintenance has enabled NGS to run efficiently and reliably for 41 years of operation to produce 2,250 megawatts of electricity at full load.

Maintenance practices have improved over the years, Jones said.

Among the major tasks completed this year were tearing down, replacing parts, inspecting and reassembling the entire Unit 2 turbine, reconditioning all of the unit boiler feed, condensate pumps, bushing replacements on transformers, replacing a water pump motor at the cooling towers, and placing reconditioned motors in its huge coal pulverizers that turns coal into the consistency of talcum powder.

A chemical clean was performed on Unit 2's massive boiler to improve thermal performance of the thousands of water tubes that line it.

All of Unit 2's pollution controls were inspected and serviced. This includes the huge electrostatic precipitators that remove 99.5 percent of the fly ash after coal is burned, the wet limestone scrubber that takes out 95 percent of the sulfur dioxide from flue gas, and its low-NOx burners that help prevent nitrogen oxide from being produced.

"We spent a lot of time on the environmental side that people don't see," said NGS Operations Manager Ed Irvin.

One of the many big jobs was replacing two massive and heavy feed water heaters the size of semi-trailers packed with stainless steel tubing.

This required tearing down an exterior cinder block wall of the building, raising the 45-foot-long, dirigible-shaped heaters with a 300-ton crane, and delicately inching them into place in a tight space around other equipment. The job took five weeks.

These types of feed water heaters pre-heat water going into the boiler from 109 to 445 degrees to improve efficiency and significantly reduce fuel use. In the power-making process, this water becomes 1,005-degree steam under extremely high pressure that turns the turbine.

For the past five years, Brian Mabey has been the NGS overhaul manager who oversees every step of the work. During this overhaul's 63-day duration, he's on the job six or seven days a week.

Throughout the year, his focus is to coordinate different activities, plan for them, identify the resources needed and the key people to perform that work, order equipment and parts needed or have them built, see that all the engineering is completed, and make sure everything is ready prior to the beginning of the overhaul.

"Once the overhaul starts, we get the old stuff out and the new stuff in, all the inspections and repairs completed," Mabey said.

Over the life of NGS, overhauls have become a finely choreographed sequence of work developed through the years based on previous experience.

Supervisors can now estimate within an hour how long a particular task will take over a nine-week period.

"It sounds simple, but it's difficult," Mabey said. "It's rewarding when it comes together like it should, too."

With more than 1,300 overhaul workers on plant site in potentially hazardous areas, safety is critical to the smooth operation of every overhaul, he said.

"At our status report meetings every morning, the first thing we talk about is safety," Mabey said. "Safety is always expected. It's not separate from the job, it should be part of the job. You're expected to do the job safely without getting your-self or anyone else hurt around you and watching out for yourself and everyone else's safety."

The key to working safely is simple, he said. Just talk to each other.

"Get together," Mabey said. "Discuss how you're going to do the job. Communication was really stressed this year."

Working alongside each other on one day of the overhaul were plant mechanic journeyman Tashina Tsinnijinnie from Kaibeto and plant mechanic apprentice Christopher Chischilly from Page, both regular NGS employees.

"Right now I'm cleaning the upper bearing housing of the inboard on the Charlie Boiler Feed Booster Pump," explained Tsinnijinnie, who has worked at NGS for nine years. "I like my job. It supports me and my family."

Chischilly, who has worked at NGS for six years, said he was cleaning an oil seal for a lower bearing housing.

"Oh, I love my job. It's a new adventure every day," he said. "I get to work on stuff, get to take it apart, put it back together and watch it run. It's important to me to come out and just keep this place running. You got a lot of people depending on you to make power for them, so we come in and do a good job."

During each overhaul, the flare of welders is seen in many areas around the unit. Welding remains one of the most important jobs to completing the work.

This year, Mabey said, there was an "unbelievable amount" of welding required, performed by highly skilled Navajo craftsmen.

"That includes tube welders, boiler makers, structural welders, flat iron welders," he said. "It was quite a bit this year, I'd say close to 80 welders."

But an overhaul needs more than workers on the turbine deck, in the basement and operating heavy equipment. It depends on a small army of administrative assistants to help keep managers coordinated and the work flowing smoothly.

Chelsi Martin was a hospital corpsman in the U.S. Navy for nine years, performing dentistry and emergency medicine. Her first duty station was in Rota, Spain.

When she came home to Page she was hired as an overhaul laborer. But with her skills she was soon assigned to provide administrative support to Mabey and his staff.

If given the option to return to the health care field when the overhaul ends, she said no thanks.

"I really like my job here," she said. "I enjoy working for SRP.