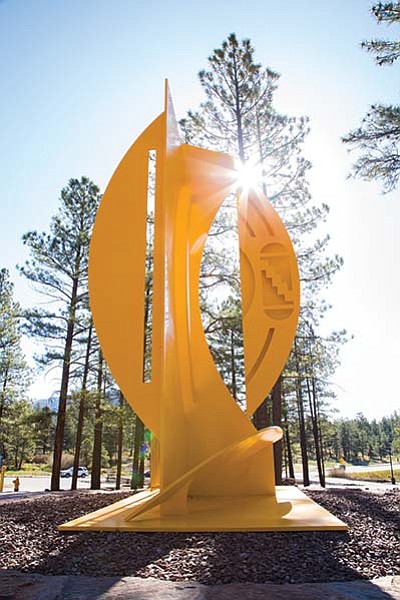 A new sculpture by Hopi artist Dan Namingha gleams in the sun outside the south entrance of the Museum of Northern Arizona in Flagstaff. Ryan Williams/NHO

FLAGSTAFF, Ariz. - The Museum of Northern Arizona unveiled a sculpture by Hopi artist Dan Namingha April 30, along with parking lot improvements as the south entrance of the museum reopened.

Betsy and Harry Easton, who were instrumental in the creation of the Easton Collection Center at MNA, commissioned the 10-foot yellow sculpture. Robert Breunig, president emeritus of MNA, said that Betsy knew of Namingha's long association with the museum and the recent acquisition of a major collection of Namingha family works.

"She just thought it would be appropriate for Dan to be the one to represent us here," Breunig said. "Even though I think she knew she would probably never see this sculpture in reality, I know she saw in it in her mind, her vision and her imagination."

According to her husband, Harry, Betsy, who was diagnosed with cancer in 2011, said that Namingha was a very talented and admired artist. The three things she wished for the sculpture were color, energy and motion.

"Dan has succeeded beyond our wildest dreams," Harry said.

Namingha said his family has been involved with the museum for years. His great, great grandmother, Nampeyo, was a Hopi/Tewa potter famous for her revival and creative use of ancient firing and painting techniques. His grandmother used to come to the museum and demonstrate during the summer and other family members have been involved too. Namingha had an exhibition at the museum almost 40 years ago in conjunction with the Hopi Craftsman Show and in 2013 exhibited Nampeyo::Namingha - Tradition and Translation.

"We have a strong tie to the museum," Namingha said.

Namingha said the many angles of the sculpture represent something that Betsy wanted. She knew the museum would continuously evolve into the future and she wanted the sculpture to reflect that idea.

In addition, the sculpture includes pottery designs from Namingha's great, great grandmother. Namingha said he also wanted to express where the museum was going - in technology, in research and in the arts.

"I wanted to create this sculpture in a very contemporary form," he said. "Especially to encourage a lot of the young artists, Native artists and other artists, who may visit the museum who have diverse backgrounds to continue their creative ideas and to take it much further."

Breunig said he talked with Betsy about the sculpture being controversial and different than some would expect.

"Robert, a little controversy is good," he said Betsy told him. "The sculpture is dedicated to the memory of Betsy G. Easton but in honor of the arts of the Native people of North America. That's what she wanted this to be."

Breunig said Betsy understood the need for functionality and beauty and through her many gifts to the museum she expressed that the museum represented quality and she wanted to invest in quality.

"She stood for that vision all the way through, never wanting to compromise one bit on quality," Breunig said. "Her vision, her commitment, her friendship has transformed this institution. She and Harry were just partners all along."