Hotevilla Village Co-op deli serves fresh, hot food with a side of wi-fi 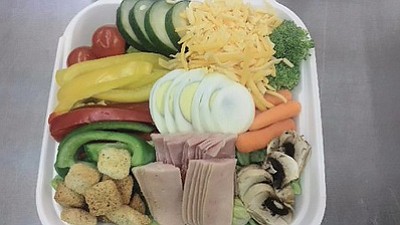 HOTEVILLA, Ariz. - As you travel further out into the Hopi and Navajo Reservations away from the more metropolitan townships like Tuba City or Window Rock, there are almost no places to get gas late at night and certainly no choices for any kind of fresh, hot food.

The Hotevilla Village Co-op store owned by Hotevilla village membership is one place people can go Monday- Friday, 7 a.m. to 4:30 p.m. (mountain standard time) to get some good food at a reasonable price without much waiting.

Located on Highway 264 between the Hopi villages of Bacavi and Hotevilla, the store offers gas, regular grocery store items, DVD rental and even some retail items like blankets or woodstove gear as well as some traditional Hopi art items on occasion.

But the big seller is the fresh, hot deli items.

Opening in the early morning. breakfast regulars come in and get a cup of hot, strong coffee while waiting for their jumbo sized breakfast burritos, which are made with either sausage or bacon or even chorizo with cheese.

Each weekday features a lunch special like club sandwiches, Hopi tacos, chili beans, BBQ pork with fries or coleslaw, fish basket or even Chinese food on Thursdays like chow mein or orange chicken with a side of fried rice.

Some of the biggest sellers on a daily basis are cheeseburgers and patty melts, which are made fresh with ground beef that is ground right on site. The French fries are hand cut and have the skins left on.

During the peak noon rush hour, the tables and chairs located right next to the deli are packed and there is even free wi-fi available for customers who purchase something from either the deli or the store. After placing an order, customers can ask for the wi-fi password to use while sitting at one of the tables. This is the only place on Hopi where there is free wi-fi for customers.

The chili used for the chili burgers and chili fries is also home-made daily, not from a can. The store put on a contest for their deli employees to see who could make the best chili, and that winning recipe is the one used in the deli food items.

The deli itself has only been in operation for about five years. It was closed early last fall because there was no fast fry cook in that open position, but now the Co-Op has hired two people to fill that full time slot.