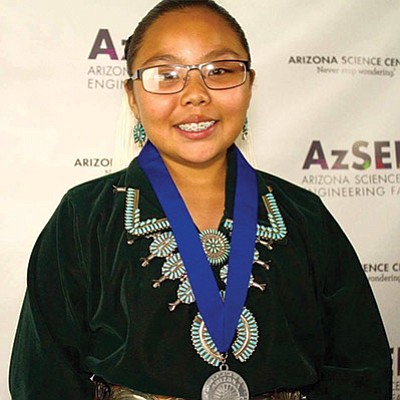 Tallsalt, the daughter of Sharimar Navaho and Michael Tallsalt and step-dad Delbert Endeschee, has won Tuba City as well as Navajo Nation Department of Education science fairs in the past two years.

This year was no different. Her project is titled "Navajo Nation Windworks." AZSEF, which is managed by the Arizona Science Center, brings together first place winners in grades five through 12 from all over the state of Arizona to compete for money and scholarships.

The Grand Award winners in the final 12th-grade competition will be selected to compete at the Intel International Science and Engineering competition in May in Scottsdale, Arizona.

Tallsalt is no stranger to winning at science competitions, having won first place two years in a row at the Navajo Nation Science Fair in New Mexico.

Tallsalt's 2016 first place win at the Navajo Nation Science Fair allowed her to enter the AZSEF competition at the state level.

Tallsalt credits her mom, dad and step-dad with continued encouragement of her interests in science and also gave appreciation to Tuba City Primary teachers Mrs. Ruiz and Mr. Conega for their support.

"Even though I was nervous and scared to present my project, I still had confidence because of all the encouragement from my family and my teachers," Tallsalt said. "I am so honored to have won at AZSEF."