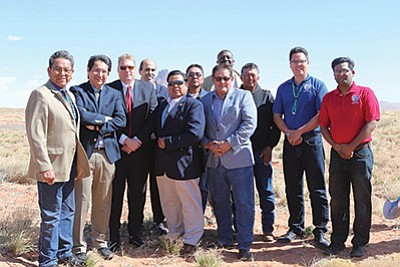 To date, NTUA has installed onsite, off-grid solar units with wind turbines at approximately 221 homes, which is the largest residential solar fleet of a tribal utility owned and operated by an Native American tribe.

The gusting winds did not prevent tribal leaders, NTUA officials, Kayenta Chapter residents, and other stakeholders from participating in groundbreaking ceremony at the NTUA substation. Once the ceremony was complete, a reception took place inside the Kayenta Chapter House.

"This is a turning point," Dietz said. "We're trying to make power in a new way. This represents a great vision on the part of our leaders here. I especially want to say how proud I am of our NTUA team. You guys do great work."

NTUA General Manager Walter Haase gave the opening remarks and began with his background and career in the utility industry at four different companies across the country. He has been general manager for NTUA for more than nine years.

Haase noted that the development of a large-scale solar farm like the Kayenta facility will bring the Navajo Nation into the renewable energy boom of the 21st century and secure the tribe's future with a green economy.

Begaye spoke in Navajo for the benefit of the tribal elders in attendance.

"You're the ones who did it," he said. "You thought about your people. It was because of your compassion and love that this electricity will be used by the Navajo people."

He noted that during his tenure as a councilman with the 22nd Navajo Nation Council, the solar farm project was moved from one community to the next, always for the same reason - lack of land. It was the Kayenta community that stepped up.

"As electricity is given to families, homes and businesses, I'm saying that it's going to originate from the hearts of the people in Kayenta," Begaye said.

Much of the $64 million required to construct the solar facility came from a low interest federal loan provided by U.S. Rural Utilities Services and National Rural Utilities Cooperative Finance Corporation, as well as tax credits. Other key players included the U.S. Bureau of Reclamation and Western Area Power Administration.

"You cannot have a solar farm without a company that is willing to purchase the electricity," Begaye said. "Salt River Project (SRP), we really appreciate your partnership in this endeavor. Without your partnership, this project would not be possible."

"The Navajo Nation is the first (tribe) to step up and make this solar facility happen among all Indian nations. The solar farm is the largest owned by an Indian tribe in the U.S.," Begaye said. "Navajos are smart. We know what to do. We have Hozho and Ke', we have a strong culture."

Nez agreed and said the Navajo people are capable of doing for themselves.

"We don't have to look to Washington, D.C. We can do for ourselves, that's how we were raised," he said in Navajo. "Our planning is strong."

He thanked the families that are grazing permit holders for allowing the project to advance for the benefit of the Navajo Nation.

The tribe is transitioning away from non-renewable energy, he said, adding that there is discussion on the Nation about how the depleting coal, oil and natural resources revenue is negatively impacting the tribal budget.

"We want to diversify our economy because of the decrease in revenues from natural resources," Nez said. "This means economic development, bringing in more businesses and doing more projects like this Kayenta Solar Facility."