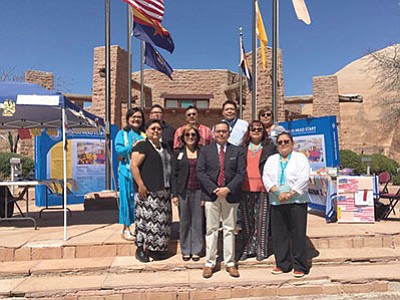 Navajo Nation Head Start requested the council approve the supplemental money from the Unreserved, Undesignated Fund Balance for the grant through the U.S. Department of Health and Human Services.

According to the legislation, the federal government awards grantees 80 percent of the cost of the Head Start program and expects the grantee to fund the remaining 20 percent from cash-match or in-kind donation or services.

The Nation's Head Start program was awarded a total of $22 million for a five-year non-competitive funding cycle from 2015-2020.

"The Navajo Nation Head Start program shouldn't be sitting here before us like this asking for funding," Damon said. "They should've already received these dollars at the beginning of the fiscal year when we were approving our yearly budget."

Damon proposed an amendment to the legislation to provide additional money in the amount of $48,000 to go toward Head Start graduation caps, gowns and promotional items for each of the 96 Head Start centers across the Navajo Nation. Each center would receive $500.

Council Delegate Leonard Tsosie (Baca/Prewitt, Casamero Lake, Counselor, Littlewater, Ojo Encino, Pueblo Pintado, Torreon, Whitehorse Lake) supported the amendment while stressing the importance of early education for Navajo children. He said he recognized it as a pathway to a successful future and as a remedy to social issues, such as poverty and loss of culture.

"We need to take care of our children better," Tsosie said. "We have some bad social statistics and the way to correct it starts from Head Start. The language and cultural loss that we are incurring, that course is being reversed because of Head Start. This is a fine moment in a family's life, so this should automatically be a part of the budget."

Sharon Singer, assistant superintendent of the Navajo Department of Diné Education, said she was thankful that the council felt the program should not have to come before the council every year asking for the cash match because they know that children are the priority.

"We need to set aside these funds so that it is recurring annually," she said. "We will continue to advocate for our children, grandchildren and great grandchildren so they all have access to a quality early childhood education."

Council Delegate Dwight Witherspoon (Black Mesa, Forest Lake, Hardrock, Pinon, Whippoorwill) said he opposed the amendment because he felt the responsibility of caps and gowns should rest with the parents through fundraising efforts.

Damon urged Begaye to sign the legislation into law while emphasizing the importance of the additional funding for graduation cap and gown items for Head Start students so they can feel proud to move onto the next grade-level with confidence.