$150 mil slated for farming and community projects on Navajo Nation 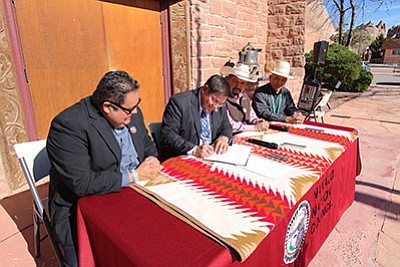 Navajo Nation Council Speaker signs legislation which aims to increase economic, community and agricultural development throughout the Navajo Nation — $30 million a year for the next five years. Submitted photo

WINDOW ROCK, Ariz. - The Navajo Nation Council approved a historic $150 million expenditure plan April 20, which aims to increase economic, community and agricultural development throughout the Navajo Nation - $30 million a year for the next five years.

Budget and Finance Committee chair and legislation sponsor Seth Damon (Bááháálí, Chichiltah, Manuelito, Tsé Lichíí', Rock Springs, Tsayatoh) said the committee worked closely with the Síhasin Fund Subcommittee and the Office of the President and Vice President to solidify the proposed projects and make sure they were shovel ready and could begin once the money is allocated.

"It's been one year to date that we have been working on this plan," Damon said. "We spent countless hours of committee meetings and work sessions to put together this five-year plan. I want to thank my BFC members for their hard work in completing this large and important task."

Damon said if Navajo Nation President Russell Begaye signs the legislation into law, the first year of the five-year plan would receive money when the controller of the Nation determines that there is at least $30 million in interest income to begin the projects.

In 1985, the Navajo Nation created the Permanent Trust Fund and invested $26 million that has grown to over $1.6 billion as of Dec. 31, 2015, according to a report provided by the Navajo Nation Office of the Controller. The creation of the fund also mandated that no income from the fund could be used for a period of 20 years from the time of its creation.

The income generated from the fund has been available for use since 2005 and was reinvested into the Permanent Trust Fund. It is now ready to be used for projects that benefit Navajo communities, Damon said.

Council members proposed two amendments while considering the legislation, including the deletion of the Local Governance Trust Fund allocation, increasing money for waterline and economic projects and adding agricultural projects.

Council Delegate Tom Chee (Shiprock), who supported the addition of agricultural projects, stressed the importance of Navajo farmers and the impact they have on Navajo land and culture.

"Farming is the foundation of our people," he said. "You are a true entrepreneur when you can grow and process your own food. Farmers stay put from generation to generation and it would be wise to invest in our Navajo farmers who can get the job done."

Damon added that increasing the economic development projects would create more than 445 new jobs within a five-year span and excess money for each year will be deposited into the Navajo Nation general fund to aid with the projected budget shortfall in FY2017.

According to the Navajo Nation Office of the Tax Commission, the projects have the potential to create approximately $7 million in tax revenue for the Nation - but the projection is an estimate and cannot be accurately determined until all the projects have been completed.