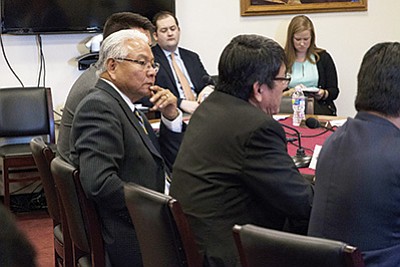 Navajo Nation Schools Superintendent Tommy Lewis said he thinks charter schools do a good job, but that there could be challenges to making them work in Indian country. Photo/Danika Worthington

WASHINGTON - Tribal leaders were noncommittal March 18 about a proposal that would divert Bureau of Indian Education funds into education savings accounts that individual Native American children could use to attend schools of their choosing.

"I think it's important to give Native children the same opportunity to choose," where they want to attend school, McCain said.

The bill would create education savings accounts that could be used toward covering the cost of private schools, books, tutors and other educational needs for tribal youth.

A student's account would be funded with the money the BIE would otherwise spend to educate him or her in a government school - 90 percent of the agency's per-pupil cost would go to the savings account and the remaining 10 percent would stay with the student's home BIE school.

The accounts would only be offered in those states that currently have education savings accounts - Arizona, Nevada, Florida and Mississippi - according to a statement from McCain's office.

Navajo Nation Schools Superintendent Tommy Lewis said that while he thinks charter schools do a good job, there are challenges facing Native families - like transportation - that could present problems. BIE schools provide transportation for students, he noted, but parents would have to provide their own transportation to get a student to a private school that could be miles away.

"How Native tribes could participate is yet to be known," Lewis said.

Angela Barney Nez, director of the Diné Bi Olta School Board Association, said that she had not yet read the bill, but liked what she had heard about it.

"It could be a dynamic path that kids could pursue," she said.

She said it could provide students with more rigorous educational options that "aren't necessarily there in the bureau system."

"NIEA must reiterate that in order to fulfill the federal trust responsibility, BIE schools must be fully funded," NIEA Executive Director Ahniwake Rose said in a statement from her office. "Ensuring BIE schools have the necessary funds to fix the construction and maintenance problems that have plagued the BIE system is NIEA's priority."

McCain said he does not see that as a problem, noting that the bill does not require that kids attend different schools, it only gives them the option to do so.

Rebecca Gau, executive director of Stand for Children Arizona, said the 10 percent is an improvement on existing education savings accounts and it addresses some of the concerns people have about the accounts.

"I do think that it (school choice) provides for an important opportunity for families to make the right decision for their child's education," she said.

But Gau said it's important that the bill provides both fiscal and academic accountability.

She said ESAs in Arizona currently lack sufficient academic accountability standards, making it hard to determine if the diverted funds are going toward a better education. Recent events show that fiscal accountability "hasn't been quite as rigorous" as it should be, she said, noting a case where a parent reportedly used funds form an education savings account to pay for an abortion.

She said there needs to be a plan laid out now, not after something bad happens.