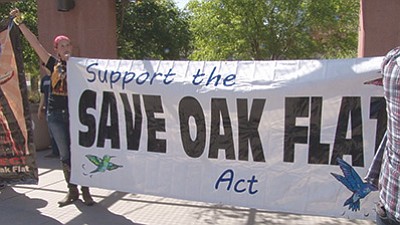 A deal to swap federal land for private land cleared the way for the proposed Resolution Copper mine project, but opponents in Congress hope to reverse the land swap and protect Oak Flat, a site considered sacred by the San Carlos Apache. Gilbert Cordova/Cronkite News

WASHINGTON - The U.S. Forest Service has started its formal review of the environmental impact of the proposed Resolution Copper mine, but opponents charge the outcome of the process is "already pre-ordained."

That's because the land being studied is going to be handed over to the mining company as part of a land swap with the government, limiting the amount of input the Forest Service can have on operations, they say.

"The conclusion is already pre-ordained," said Robin Silver, co-founder of the Center for Biological Diversity, of the National Environmental Policy Act review that began March 18. "It's an insult to everybody."

But a Resolution Copper spokesman disagreed, saying the public will have a voice in the process.

"A lot of people believe the NEPA process is predetermined, but the reality is NEPA is the vehicle that will allow all voices to be heard," said Bill Tanner, the spokesman.

He said that the public will be involved in every step - from the initial scoping process, to the drafting of the environmental impact statement, all the way until the final decision.

Silver said that although the public may comment during the NEPA process, many mine opponents feel as though the odds are stacked against them.

The process officially began Friday when the Forest Service announced that it would prepare an environmental impact statement for the Resolution Copper project and associated land exchange.

In this first part of the process, the public has until May 17 to identify subjects they would like to see studied in the report. The Forest Service then works to determine what the environmental impact of the mining will be on the land and surrounding areas and resources.

Once completed, a draft of the environmental impact is released and opened to public comment before a final record of decision is released, a process that Tanner said could take years.

He said Resolution Copper is encouraging all stakeholders to participate in the public comment opportunities and the company will make sure information on how to comment is readily available.

A spokeswoman for the Tonto National Forest, which is the lead agency on the review, would not predict what might happen with the process.

"You never know what is going to happen in the future," said Carrie Templin, spokeswoman for the Tonto.

Templin added that the agency does have "some limited discretion" over the process, which will consider both the proposed mining operations and the land swap that would clear the way for the mine. But both she and the notice said that there is little leeway on the outcome of the land swap.

"Congress has directed the Forest Service to complete the land exchange," Templin said.

The land exchange was approved by Congress in December 2014 as an amendment to a defense funding bill, ending years of unsuccessful efforts to pass the Southeast Arizona Land Exchange and Conservation Act as a free-standing bill.

Included in the land the company will receive is an area called Oak Flat, which the San Carlos Apache consider to be a sacred site.

Opponents of the mine scored a point earlier this month when Oak Flat - known as Chi'chil Bildagoteel by the tribe - was listed on the National Register of Historic Places. The designation does not protect the land from mining, but will serve as a reminder during the NEPA process that the site has unique historic resources.

Resolution Copper has said the mine will create thousands of jobs in southeast Arizona and will boost the state's economy by billions of dollars during its projected 60-year lifespan.

But Silver said these jobs are temporary and will most likely lead to another ghost town when the mine closes.

"They leave their dump, their garbage, their waste..." he said, concerned that the mine will do more harm than good. "The studies have no effect."