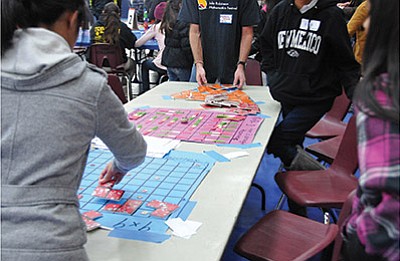 TSAILE, Ariz. - Diné College, the Navajo Nation's community college serving more than 1,600 students, is preparing to make significant academic changes that will improve the quality of education for all of its students.

Helping to lead this significant change is Interim Provost at Diné College Dr. Henry Fowler. Fowler plans to encourage more participation and focus on science and mathematics as a way to build the Navajo Nation. He initially came to the college as a math teacher and realized the programs could be strengthened.

Fowler explained that when he first came to the college four years ago, he noticed that students only took college algebra and were challenged by remedial math courses. He realized that students needed more challenges in order to strengthen learning and thus strengthening Navajo students.

"I had to be innovative and encourage students, and tell them that if we really cared about building the Navajo Nation, we have to care about science and mathematics," he said.

Fowler said he understands mathematics is not everybody's strong suit. He understands that many students are challenged by math. As a result, he helped to create a unique program called Navajo Nation Math Circles (NNMC) that integrates Navajo culture into the curriculum as a way to teach math concepts. The new program not only helps students learn mathematics, but it also incorporates the Navajo language and culture into lessons.

Fowler was recently featured in the upcoming Navajo Math Circles documentary film that has already won three major awards. The film debuts in the Southwest April 3 at the Museum of Northern Arizona in Flagstaff and on April 6 at the Navajo Nation Museum in Window Rock, Arizona.

In working to strengthen the college's math and science programs, Fowler is helping to expand the college's Bachelor's and graduate programs. He also wants to ensure the integration of the Navajo language and culture into the core teaching philosophy of the college.

The college plans to have Bachelor of Science programs in biology, psychology, and secondary math and science education, as well as two Bachelor of Arts programs set up in the near future.

By adding more programs to the school's catalog and increasing the use of Navajo language in education, Fowler hopes to start a trend that will benefit the Navajo Nation for years to come.

"Our intention is for [students] to gain as much education from Diné College, along with Navajo culture and language, so that they are successful, and they come back to the Navajo Nation, and that they help us," he said.

Fowler explained the strengthening of Navajo language and culture in its programs will help build character among Navajo youth as well, and it will help benefit the maintenance of Navajo culture.

"Character shapes who we are," he said. "It reflects our fire poker at home, and it reflects our elders teaching us who we are as individuals. If our elders are very precious to us, if our way of home life is very precious to us, this stems to our character. As my mother says, 'if we do something wrong out there, they're not going to be calling your name, they're going to be calling 'us.'"

With these changes in academic programs and strengthening of a cultural focus, Fowler hopes Diné College becomes the Navajo Nation's new hope and new vision, and some day, he hopes the Nation will unite together under "The University of the Navajo Nation."

"We have a new energy, a new wave of intelligence, of new knowledge and of new skill," he said. "This college has great potential and many new opportunities."