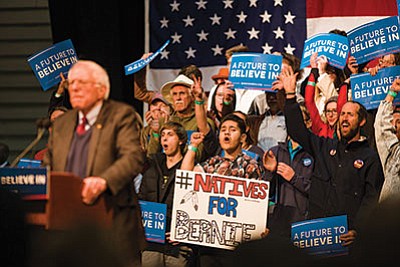 Democratic presidential hopeful Sen. Bernie Sanders (I-Vermont) speaks to a crowd of 3,000 during a rally at Ft. Tuthill March 21. Sanders discussed Native American issues among many other issues in a one-hour speech. Photo/Ryan Williams

In Phoenix, the Nation was represented along with other Arizona tribes like the Gila River Indian Community, Tohono O'odham Nation, Camp Verde Yavapai-Apache and Ft. McDowell Yavapai Nation.

While Sanders had also been traveling around Arizona in search of support from Native American tribes, many of the tribal leaders who met with Clinton had already endorsed her campaign for the presidency of the United States.

"I was one who endorsed her early on," Nez said. He was one of the first tribal leaders to join the Hillary for America Arizona Leadership Council in early February.

Begaye said it was good for Clinton to sit down with tribal leaders and have a discussion about Native American issues. Begaye brought up three issues he would like addressed. One was that the Nation needs to have full authority and jurisdiction over non-Indians committing crime on the Nation. Second, the president said the Nation needs complete control over its natural resources. Third, Begaye asked for a cabinet level Native American position that will collaborate directly with the president, which would combine all the resources of federal agencies to address Indian issues.

"I think the Navajo Nation has gained the respect from the Clinton campaign," Begaye said. "They know that we are leaders among tribal nations. I was able to help moderate the discussion at the meeting and it was very meaningful to talk about the critical issues that are important to Navajo."

Nez brought up the issue of suicide prevention. Since December 2015, Nez and Begaye have used the Building Communities of Hope tour around the Nation to address the problem of suicide among the Nation's youth and talk about prevention and post-vention.

"We need to raise the awareness that suicide is a problem on the Navajo Nation," Nez said. "Today, we needed to let [Clinton] know. She said she is supportive of getting more resources out to tribal nations."

"It needs to be one-on-one," he said. "We need to continue the momentum moving forward from the Obama administration."

Begaye discussed the need to defend the Indian Child Welfare Act (ICWA) to keep Indian children with their relatives and family before finding non-tribal foster parents.

During the Sanders rally before 3,000 people at Ft. Tuthill in Flagstaff, Sanders said in addition to his usual stump speech that anyone who has studied Native American history for three minutes knows how shamefully Native American people have been treated from the day the first settlers arrived.

"We owe the Native American people a deep, deep debt of gratitude," Sanders said. "They have taught us so much... and enriched our culture. And maybe most significantly, they have taught us that it is imperative that we live with nature as part of nature..."

Sanders said as president of the United States, he will begin the process of treating the Native American people with respect and dignity they deserve.

Begaye has yet to endorse a presidential candidate and said he still hopes to hear from the Republican candidates to hear their views on critical Native American issues.