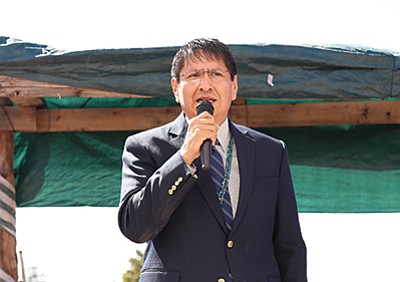 TONALEA, Ariz. - For Bennett Freeze Area families, T'áá hó ájítéego or self-reliance, is more than governmental rhetoric, it is a way of life for the Navajo people.

On March 4, Navajo Nation Vice President Jonathan Nez traveled to Tonalea to celebrate completion of the White Mesa power line project, which brought electricity to 16 families who have been immobilized by the federal government's policy to ban development in the area since the mid-1960s.

The celebration took place at the home of the late Floyd and Susie Whiterock. Their children and grandchildren now occupy the modest dwelling, surrounded by other family members who live nearby.

New power line erected by construction crews from Navajo Tribal Utility Authority stretched for miles throughout the desolate area that remained untouched because of a land dispute between the Navajo Nation and Hopi Tribe.

In 2006, the Bennett Freeze was lifted and Congress formally repealed the policy in 2009 opening the door for development in the area.

The Begaye-Nez administration has made development in the area a top priority and is currently planning projects through an action team that includes housing and infrastructure sub-groups.

"For decades, our Navajo families in the Bennett Freeze have survived overwhelming odds, hauling water, doing homework by the illumination of a flashlight, and protecting themselves against the elements in homes that could not be repaired because of unjust federal policies," Navajo Nation President Russell Begaye said. "We stand committed to improving the quality of life for our Navajo families in the Bennett Freeze area and fast tracking infrastructure projects that will provide electricity and water to families. We have heard your pleas and they will not go unheard."

According to the Begaye-Nez administration, leveraging funding from the federal government and the Navajo Nation is crucial to development in the area and the administration is reviewing other outside partners, including a home building philanthropist from Texas.

Nez said the ceiling amount for tribes applying for money from the Indian Community Development Block Grant program from the Department of Housing and Urban Development is $5.5 million. It is an amount the Navajo Nation has been fortunate to receive over the years.

"We have to determine which projects are construction ready. With Tonalea, their project was ready," Nez said.

Nez said the White Mesa power line project was packaged with other projects and was funded with money from the Navajo Nation Community Development Block Grant program and supplemental appropriations from the tribal council.

"It's great to see the reality of power lines coming into the Former Bennett Freeze Area," he said. "President Begaye and our team are making the Bennett Freeze a priority for our administration."

Nez encouraged other chapters in the Bennett Freeze area to be proactive in community land use planning, house wiring projects and other activities with community members. These pre-development activities move infrastructure construction along swiftly, he said.

James Adakai, program manager for CDBG, gave appreciation for the 22nd Navajo Nation Council, NTUA and the chapter for completion of the projects.

"Thank you for working with the CDBG program on these three projects that were completed with matching funds," Adakai said.

Darryl Jim, chapter president, said the next major project for Tonalea is Phase II of Wildcat Peak power line extension, a $1.3 million project that will serve 26 families. Other projects include Phase II of White Mesa power line, which will serve 11 families, and the Saguaro Wash power line project.

The White Mesa power line project cost $441,589 and was funded by CDBG appropriations from FY 2008. CDBG contributed $314,224 and supplemental funding from the Undesignated, Unreserved Fund Balance amounting to $127,365 was approved in 2015 to complete the project. Construction began in December 2014 and the project was completed March 4.

While the infrastructure development is slowly growing, decades of oppression from the freeze still stymie quality of life improvements for Navajo families in the area.

One woman waited a lifetime to see her home powered by electricity.

Lavania Begay is the daughter of Floyd and Susie Whiterock and said she was born in the Bennett Freeze.

"This house was built by my mom and dad in 1962 and we maintain this home in memory of them," she said.

Long deceased, her parents raised seven children in the home, teaching their kids the value of resilience and self-determination in a land long forgotten by the federal government.

Begay said the home was connected with water in 2008, but her parents never got to see the quality of life improvements they prayed for after decades of strife.

"My parents didn't see the electricity or the running water. My cheii, Harry Jim, passed away and he was hoping for electricity. He died in December. This has happened to a lot of people," she said. "But we're so thankful and appreciative of the power line."

Born on March 13, 1960, Begay said survival was a common theme throughout her life, making due with kerosene lamps first, then solar power, which was spotty at best. Her family bought ice five times a week to keep food cold and hauled water for bathing, cooking, drinking and to maintain livestock.

"My parents passed on. Now, it's us: our kids and our grandkids. That's four generations that are still suffering from the Bennett Freeze. People have everything today, but we're still living like a third world country out here," Begay said.

Families in the area are looking forward to new homes, she said, explaining that many young people have moved away because of the economically depressing conditions.

"I was born into the Bennett Freeze and lived it all my life. It's still going on. We're not there yet. I still think of it as frozen. We have a long way to go," she said.

Her hope is that new home construction will bring her kids back, including her oldest son, who lives and works out of his truck, employed as a non-medical emergency transport driver.

"Our kids leave because there's no jobs, no opportunities, no homes. I guess to them, it's like there's nothing out here. I want my kids and grandkids to move back," Begay said. "Without our friends and relatives, we probably wouldn't make it. We help one another and take care of each other. That's what we do out here."