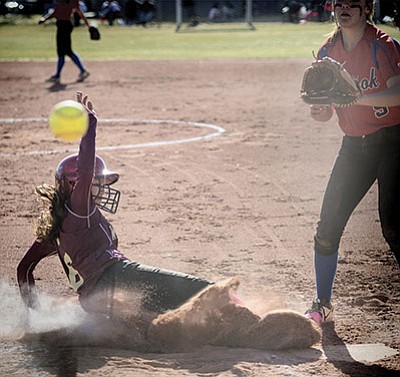 WINSLOW, Ariz. - The Winslow Lady Bulldogs had an eight and three season with four straight wins going into their game against Apache Junction March 18.

Winslow won seven of its last eight games since its loss to Kingman March 4. The Lady Bulldogs topped Monument Valley 14-0, Independence 15-0 and Santa Cruz 9-3 before losing to Sahuarita 7-4 all in the Wickenburg Tournament.

In the 9-3 win over the Santa Cruz Lady Dust Devils Justine Butterfield worked five innings for the victory giving up three runs, two of which were earned, on just three hits and two walks while fanning three.

Hailee Branson was three for three with two home runs and a double. Alicia O'Haco was two for four with two doubles. Morgan Thomas, Alona Padilla, Alyssa Barton, Butterfield and Sierra Wilcox were all one for three with Barton knocking out a home run. Alyssa Smith was one for four.

In the 7-4 loss to Sahuarita, Sherreise Beaty took the loss giving up four runs on nine hits and three walks in four and two thirds innings. Hailee Branson was three for three with two doubles. Gabby Gonzalez was one for two and O'Haco was one for three for the Lady Bulldogs.

In the 10-0 win over Sunnyslope Beaty got the win giving up no runs on just one hit in the game shortened to five innings.

In the 29-3 win over Round Valley Butterfield got the win going all five innings and giving up three runs on seven hits and two walks. Winslow had 24 hits including five home runs and five doubles.

The 14-0 win over Holbrook went to O'Haco who worked three innings giving up one hit and one walk. Butterfield worked two innings and gave up one hit. Scott and Thomas were two for three for Winslow. Gonzalez was two for four. Smith and D. Kinlicheenie were one for two with Smith having a home run. Branson and Ariana Quinonez were one for three.