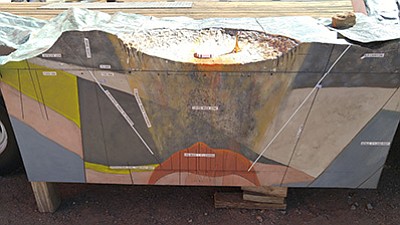 A scale model shows the depth of a pit that mining in Oak Flat would create resulting in the collapse of the land above it. The Eiffel Tower and University of Phoenix stadium show scale. Photo/Kevin Moriarty

SUPERIOR, Ariz. - Jane Sanders, wife of presidential candidate Bernie Sanders (I- Vermont), visited the Apache Stronghold at Oak Flat campground, a sacred site to the San Carlos Apache, calling attention to the fight against a land swap that will allow mining in the area.

The controversial rider, which circumvented normal legislative procedures, was attached to the 2015 National Defense Authorization Act, authorizing approximately 2,422 acres of Forest Service land known as Oak Flat in the Tonto National Forest in Southeastern Arizona to be transferred to a mining company called Resolution Copper, which is a subsidiary of Rio Tinto and BHPBilliton, two of the biggest metal mining companies in the world, according to Earthworks.

The bill was originally introduced in the House of Representatives and brought to the floor twice and pulled from consideration both times. The bill in the Senate was never considered or brought before the Senate Committee on Energy and Natural Resources.

Rep. Raul Grijalva, (D-Ariz.) has sponsored a bill to remove the section of the National Defense Authorization Act of 2015 that authorized the land swap. Sen. Sanders cosponsored the bill in the Senate.

Resolution Copper said the area is one of the world's largest untapped copper resources and that copper from the proposed mine will "help wire a rapidly growing world and drive the new green economy, powering everything from wind turbines to electric cars," according to its website.

The company plans to use a method of mining called block caving, which, according to material from Resolution Copper, is a well-established method used at more than 20 mining operations around the world.

"The ore is blasted, transported and crushed underground, then conveyed to the surface for further processing," the material said. "Block caving is safe, environmentally sound and cost effective for mining a large, deep ore body."

According to the bill sitting in committee in the House of Representatives, block caving is the cheapest mining method but is highly destructive.

"[Resolution Copper] intends to use [this method] to remove one cubic mile of ore that is now 7,000 feet beneath the surface of the Earth without replacing any of the earth removed because that is the cheapest form of mining," the text reads. "Resolution Copper admits that the surface will subside and ultimately collapse, destroying forever this place of worship."

Native American tribes, especially the San Carlos Apache and the Yavapai-Apache Nation, say the copper mine will result in the destruction of an area they consider sacred and deprive Native Americans from practicing their religion, ceremonies and other traditional practices. In addition, they say the mine will deplete and contaminate water resources.

While Resolution Copper has also said the mine will produce jobs in the area, some area residents like Roy Chavez, former mayor for Superior and formerly a mine worker, isn't so sure. He now works for Concerned Citizens for Arizona Mining Reform. He disputes exactly what those jobs will look like.

"Any number they use, whether it's water, jobs or the revenue that is going to come in, those are all projections," Chavez said. "You can't guarantee any of that. There's nothing that they can guarantee other than the devastation that is going to take place, the environmental impact. That is a fact."

Chavez has created a model to show the impact of the mine, based on Resolution Copper's numbers. It shows the area that will cave in because of subsidence in addition to other impacts.

Jane Sanders said she was honored to be at the Apache Stronghold and to have been given a tour of the sacred spots in the area. She assured the crowd that she and her husband will do everything they can to make sure the area isn't destroyed through Resolution Copper and copper mining in the area.

"[It was] so generous of you to allow me to come and see what you have been fighting for," she said. "To be able to walk up in those hills and see those beautiful sites, archaeological sites that show where people lived before, where people were buried. Where your ancestors are still. We could feel their spirit. It's not just rocks and land and water. We could feel a spiritual connection there."

President Barack Obama recently listed the area as a historical preservation site, which Sanders thought would help in stopping the mining even while the legislation to stop the Oak Flat mining is stuck in committee right now in both the House and the Senate.

"But this gives a legal opportunity that didn't exist before," Sanders said. "What's interesting to hear is that [President Dwight] Eisenhower did the Oak Flat, he stopped the mining here and [President Richard] Nixon agreed. So it's good to see Obama vetting it as a historic preservation. That's strategically very smart. That had not happened when I decided to do this trip and we were thinking, 'what can we do?' We were really happy to hear this beyond the legislation."

Sanders added that water concerns across the country are also drawing attention and that some of the contaminated water is on the reservation, with arsenic on Hopi and uranium throughout.

"[Bernie and others] are really fighting to let others know that we need to address issues in terms of our water, in terms of our aquifers, in terms of our rising oceans and acidification of oceans. We need to take care of Mother Earth much better than we have been doing in this century," she said.

Chavez said there has been talk in articles of how the mine is the best project in the world, that it is the deepest mine and it's going to be so great and how the people who constructed the shaft felt.

It is those concerns that drive Chavez, a former mine worker, to oppose the project. While he said there are safer methods of mining which he might agree with, he is trying to gather support from environmental groups and people who are concerned about the economics and others while working with the Apache Stronghold, who oppose mining altogether.

"We respect and sympathize with the position of the Stronghold, we understand their position," Chavez said. "We have to deal a little outside of that box in regards to gaining support for the opposition. It's important. We are trying to be real in the sense of how do we get more people on board. I can't speak for the Apache or represent them in any way, shape or form and I don't. But I certainly can understand and share that understanding with other people."

Chavez said it was a diverse coalition that defeated the legislation for a decade. He wants to see that now.

"It took a covert action to get the legislation theoretically passed," he said. "I don't think this is a time for us to dissolve our relationships. This is a time we band together hard to repeal the deal."

Jerry Thomas, a Navajo who is married to a San Carlos Apache woman, said he was there to support the effort in part because of his own history. His mother was removed from her home six times in the land dispute between the Navajo and the Hopi and he said the coal mine destroyed the water - depleting and pumping water from Black Mesa to Las Vegas, something he sees happening at Oak Flat if the land swap is allowed to go forward. Thomas said, especially on the reservations, water is power and the mining companies are the worst consumers of water.

"That's my main issue here, is the water," Thomas said. "Back in the 20s... the government dammed all the rivers that run through the reservations, if you look at the map, the waters are collected and diverted away from reservations. They say, 'you're not a farmer, you're a hunter, you don't need that water.'"

Thomas believes that the Navajo and the Hopi have just as much stake in what goes on at Oak Flat as they do in trying to protect other sacred areas closer to home and that they should not take pure water for granted and let anyone take it away in land settlements.

"It's just as important for the Navajos, the Hopis, the Zunis, all Native Americans - God created Earth for us in his own image," Thomas said. "Not meaning, God's got five fingers, two eyes, a mouth, a nose. No. He made us from the Earth that he created. The water that makes our body. The mind he has to make us move. The air we breathe - the air tracks we have right on our fingers. That is God's creation. We're made in his own image. Have respect for nature."

Another woman, Angel (she did not want to provide a last name for privacy), a San Carlos Apache tribal member, said it was important to preserve what the Apaches have left and that while the boundary has moved over time, the land she was standing on was Apache land.

While critics have said Oak Flat is just a campground, Angel said the area has more meaning.

"It is just a campground," she said. "We take advantage of it while it's here. What it stands for and what it means. We come here and we use it. There is history behind it. It's a lot more than that because we know what's behind that. It's a National Forest and anyone can use it as long as they protect it."

Sanders one on one

Sanders also said the campaign is working on a Native American platform should Bernie Sanders get elected.

"I said, 'Wait a minute, I'm going out there, I want to talk to individuals and find out a little bit more before we publish it,'" she said. "I'm glad I did."

Sanders said her interest comes from realizing that Native Americans are the stewards of the Earth and they have not been given a fair deal historically or even in the present.

She said the question is how to make sure all people can lead healthy, happy lives.

If there is a Sanders administration, Sanders said she and her husband look forward to building on the improvements in tribal federal government relations that the Obamas have built during the last eight years.

"We'll build on that progress," Sanders said. "They've built a very good foundation and they're good people and they care."

Oak Flat designation a win for mine opponents, but fight may continue
San Carlos Apache bring fight against Oak Flat mine back to Congress
Fighting over Oak Flat
Court rules against Apaches in bid to halt proposed mine in Oak Flat
Oak Flat mine protesters march 40 miles on trail of opposition
Contact Us
Submit Questions, Comments, or Story Ideas