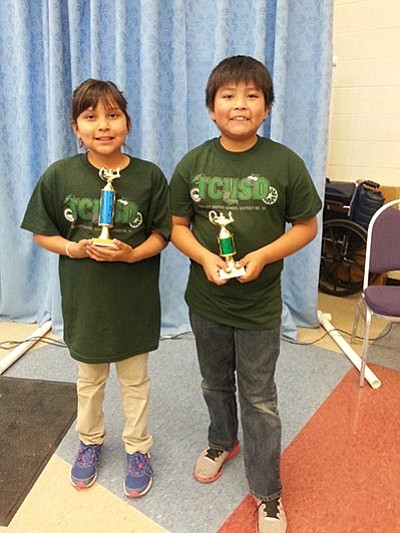 Kasia Yazzie, third grade, is the grand champion for the Math League competition in Tuba City last week and now will represent Eagles Nest Intermediate at the state finals in Tucson along with Noah Smith, fifth grade, who placed fifth in his grade level. Photo/Rosanda Suetopka

Two Eagles Nest third graders placed in the top 10 in their grade level with seven of the Eagles Nest students qualifying to go on to the more aggressive state level math competition later this month in Tucson.

Third grade student Kasia Yazzie performed so well she took the top honor of Grand Champion for her grade level.

Fourth grade teacher Sophia Begody, one of the sponsoring Math League coordinators for the Tuba City district along with Myleene Ruiz, a fifth grade teacher, was extremely pleased with the final results and win for Eagles Nest students.

"We are so proud of all of our students and excited for them to advance like they did and now go onto state competition," Begody said. "It was a great experience for us all, and I want to thank our Principal Dr. Justin Roberson and our school board for this opportunity to have the students travel and meet other schools who are also in competition in the math area. It was a challenge but our students were ready."

Students who competed on behalf of TCUSD's Eagle Nest Intermediate School were:

Roberson was especially pleased with his students' final competition results.

"Congratulations to all of our Math League participants, state qualifiers and our Grand Champion Kasia Yazzie and their teacher sponsors," Roberson said. "Good luck at Tucson! We are all so very proud of you."

Dr. Harold G. Begay, TCUSD Superintendent was equally happy to hear that students from Eagles Nest, one of the seven schools in the Tuba City district, were successful at the local Math League competition that will enable several of the students to go on to the state competition.

"Exceptional work," he said. "These students have shown much success and achievement with honor and humility representing our middle school and district!"