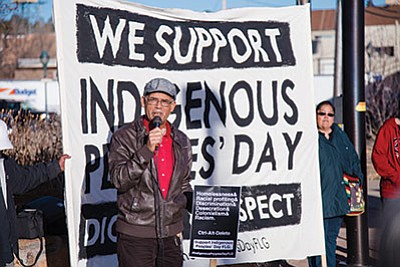 FLAGSTAFF, Ariz. - The Flagstaff City Council set a path for more meaningful dialogue, understanding and respect between indigenous and non-Native people March 8 at the city council meeting while considering a proposal to establish the second Monday of October as Indigenous Peoples Day.

Indigenous Peoples Day has been declared throughout the country as a way of recognizing that for some communities Columbus Day was not a day of discovery but invasion. Columbus Day first was recognized as a federal holiday in 1937.

The city council unanimously agreed that staff should move forward with plans that could establish the second Monday of October as Indigenous Peoples Day alongside the recognition of Columbus Day so people in Flagstaff can recognize and celebrate the Native Americans who also make up the community.

Council member Eva Putzova initially proposed declaring Indigenous Peoples Day in October of 2015 but withdrew her proposal after indigenous community members called for meaningful action to address injustices faced by Native peoples. The proposal now includes a three-step process with public hearings, reports and a plan based on input from the hearings.

"When we learn about what Native Americans communities consider important and we hear suggestions about how to improve the lives of the Native American community in Flagstaff then maybe we can put together a plan and make an honest effort to improve those lives," Putzova said. "After we do all that, as the cherry on top of the dessert, then we can consider declaring an Indigenous Peoples Day in Flagstaff."

Radmilla Cody, an activist in Flagstaff, told the council that Columbus was the first European man on this continent with the backing of state and religious authority to ignore and even encourage the murder and kidnapping of indigenous women, a prolonged legacy that exists still as over 3,000 missing and murdered indigenous women cases remain unsolved.

"Today, we see the reality that Columbus helped to create," she said. "We see it here in the border town of Flagstaff and other border towns where homelessness, racial profiling, discrimination, racism, and the desecration to sacred sites...are clear and evident toward indigenous people, their lives, intelligence and lands."

Cody told the council that by standing with their friends and neighbors by voting for the proposal, the council would find themselves on the right side of history - a critical step toward addressing a long history of racism, violence and marginalization of indigenous people.

"For Diné people, we have a system of hope and resilience called Siihasin," she said. "[It] is enforced by the truth and that truth is we all have love and compassion for each other. We all desire a life lived on our terms and with dignity."

Christopher Jocks, visiting assistant professor for the Applied Indigenous Studies program at NAU, who attended a rally on the lawn at Flagstaff City Hall before the meeting, said he asked himself why anybody would not support the resolution when the ground Flagstaff and surrounding communities sit on is indigenous ground. He wondered why anyone would not want to establish a better and more collaborative relationship between the city of Flagstaff and the people who live, work, shop and travel here and whose ancestors have been here for generations.

He said he thinks about why people would not want to support the resolution.

"[It could be] a feeling of superiority or a feeling of fear or it could be a combination of both of those things," Jocks said. "People with wealth and power...don't want to lose any of that. They don't want to look too deeply into the history, into what has happened on this ground. Or what is happening today on this ground. It's easier to put a smiley face on it and move along and focus on economic development."

Jocks stressed that the reason most people were out at the rally and why the council should support the resolution is because there is no reason for that fear.

"We are human beings," he said. "If someone approaches us with respect, with dignity then we'll respond with respect and dignity and we'll begin a process where the grievances, the painful history, the painful current events that are going on, we can bring those out and air them out and discuss them and figure out what it is that we can start to do together to form a real community here."