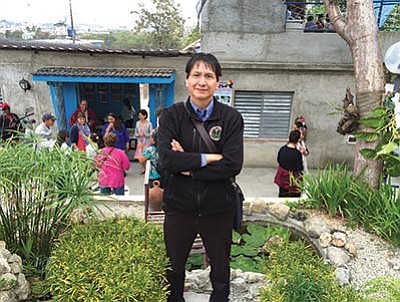 HAVANA - Navajo Nation Vice President Jonathan Nez traveled to Havana and participated in a cultural exchange Feb. 21-28 to learn about the Cuban health care system and its relevance to the Navajo Nation.

A team of 17 people ranging from community members to health care professionals joined Nez on the visit, which the Medical Education Cooperation with Cuba (MEDICC) sponsored.

The weeklong exchange was called, "People-to-People: Community Partnerships for Health Equity" and was focused on data gathering and experiencing the Cuban health care system.

Nez described Cubans as a proud people with a strong sense of nationalism and duty sustaining their community, especially culturally.

"The most gratifying part of the exchange came from direct contact with Cubans and hearing their perspectives on caring for their land and one another," he said. "They are a proud group that has survived countless challenges, but their cultural resilience is clear, to be and remain Cuban. There are very few health issues. Cubans eat a steady diet of rice and beans, which is farmed throughout their communities, in addition to medicinal plants."

Founded in 1997, MEDICC is a non-profit organization working to enhance cooperation among the U.S., Cuban and global health communities aimed at better health outcomes and equity, offering the Cuban experience to inform global debate, policies and practice.

MEDICC considers the Cuban universal health care system as a model for underserved populations, best described in their vision statement, "Health for All is Possible." The organization is currently working in partnership with Community Outreach Patient Empowerment (COPE) of Gallup, New Mexico.

Nez said the Navajo Nation and Cuba are two distinct cultures, but many similarities exist, in particular, a deep respect for the land and affection for the people.

"Cubans are the embodiment of resilience through a lasting heritage and culture, very much like our Navajo Nation," he said. "Kids there know their rights and who their national heroes are."

In 1959, the Cuban health care system was established, focusing on preventative medicine and replacing the curative model. During the visit, the group met with the top health administrator and witnessed that the island nation had few health problems.

Notable successes of their health system include an infant mortality rate lower than the U.S., and among the lowest in the world; a life expectancy of 78 years, the best performer on the American continent; and formation of the Latin American School of Medicine.

Perhaps the most impressive statistic from Cuba was from their behavioral health efforts, which saw very few problems with suicide. Health care providers live in the communities and know the people in the service area, similar to tribal community health representatives.

"Everybody knows each other, so it's easy to see the warning signs from someone who is suicidal," Nez said.

While the two age groups can assist in the renewal of tribal communities, Nez encouraged the Navajo population to begin the dialogue between tribal elders and youth.

Navajos need to return to farming and sustaining their families and communities, he said, similar to what he witnessed in Cuba. He challenged the Navajo people to grow something organic this farming season.

"We are blessed because we have the Navajo philosophy of T'áá hó ájítéego, self-reliance," Nez said. "Don't forget we're in this together. Thank you to MEDICC and COPE for their commitment to the health of the Navajo Nation and for the financial support for the Cuban cultural exchange."