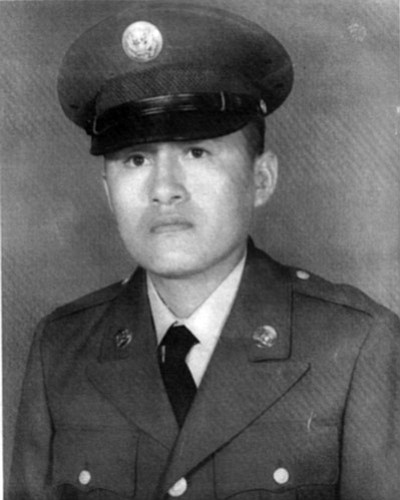 Ben Little was born at a place called an eagle's nest, which is an isolated area one mile near north west of Cactus Valley Big Mountain, Arizona. He is the son of Etta Johnson and Bert Little. He attended Kayenta Bureau of Indian Affairs School and graduated from Intermountain BIA School, Brigham City, Utah in late 1967.

He received a purple heart from Vietnam combat; he fought guerrilla warfare in Vietnam; he was assigned to infantry special operation in the Vietnam War. Sometimes he had to crawl, had to run, had to lie partly submerged in a swamp or in a lagoon or in the jungle heat, pinned under machine gun fire and a concealed explosive device set to go off when some harmless-looking object is touched.

Ben Little was one of the Vietnam veterans who was a descendant of the Navajo men and Navajo women, who, before the 1868 Long Walk, had been driven from their homes among the four sacred mountains of Navajo country -driven like cattle for more than three hundred miles to Fort Sumner, a "concentration camp" for Navajo Indians - in what has come to be known as "The Long Walk."

Also Ben Little was driven off the relocation land by Federal Government after 1972. When he went to the hospital for treatment he was told to wait in line just like the rest of the military veterans or civilian of America.

Ben Little has a wife, daughters, son, sons-in-law, and grandchildren. He was a self-educated class A welder for Peabody Coal Company and retired from the coal mine. Also he has an establishment for the raising and grazing of livestock (as cattle, sheep or horses). He was a traditional-conservative person, who went to church when he was asked to go to church.