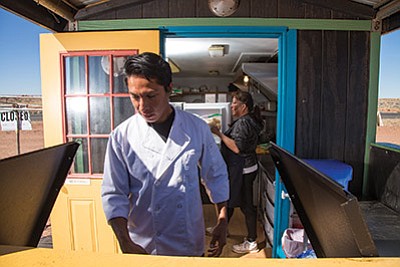 CAMERON, Ariz. - It's an unusual spot for a food truck.

The Native Grill, not to be confused with the restaurant in Flagstaff, is a family-owned business that Alfreida Littleboy and her mother started a couple years ago. Since last April, the business has expanded to include other members of Alfreida's family, including her sister Freida Littleboy and Freida's son Brandon James, among other relatives and children of family members.

Freida and James both worked at the Cameron Trading Post seasonally but a lack of jobs on the western side of the Navajo reservation in the Bennett Freeze area was one reason Alfreida started the business with her mother.

"The distance for employment was Flagstaff or completely out of town," Alfreida said. "And most of us have young kids who are still in school. We figured it was a way to try it and start working together as a family."

James works the grill for the food truck, grilling up delicious lamb fillets and burgers while Freida makes the fry bread and tortillas. Some of the dishes come with corn on the cob and boiled potato. Burgers and Navajo burgers are also available along with dumpling stew and chili beans.

"We are trying to keep people healthy," Freida said. "This is basically like our Native food because otherwise people have to go to Tuba City or Kayenta for dumpling stew or grilled lamb. Here it is closer for them and they really like it."

Prep time starts at 9:30 a.m. at their home, which is across the highway, not even a quarter mile from where they park the food truck during the day. They are generally at their site around 11 a.m. and stay open until about 6:30 -7 p.m., which means they get a lot of tourists who travel along the highway.

Locals from the surrounding community visit the food truck when they get off work or take breaks from the Cameron Trading Post. But they also get people from further away who are looking for traditional, real, clean and fresh food.

While the work is hard and the hours are long, James said it is worth it, especially because of the family dynamic. It is easier to find someone to cover a shift and there is a lot of laughter with the hard work.

"Here, we have fun," he said. "We help each other. That's one thing about having a family-owned business. We learn communication skills between each family."

Freida said the business has helped the entire family grow closer. While before everyone was immersed in their own jobs and concerns now they all pull together with a single goal. And it makes getting the family together for special events easier, too.

"We don't have to open and we'll all be there," Freida said. "I don't feel like I work any harder here than when I worked at the restaurant. But like Brandon said, I enjoy this a lot better."

Alfreida said she has nothing but positive things to say about the outcome of the family working together. She and her mother used to work long hours with no time for anything else but now there is a pool of people to help out.

"It has opened a lot of communication lines," she said. "We learned to work together better as a team. We realize that it is not going to work unless we all work together. And that we just need to do our best to be there for each other."

Because elderly people visit the food truck from all over the reservation, the kids who work on the weekends are encouraged to interact with them and speak to them in Navajo.

"We're with them more, especially during the summer and on weekends, we're able to interact with the kids more and explain stuff and talk to them in Navajo and reinforce that they speak it back to us," Alfreida said.

In addition to that, Alfreida said the kids have grown a lot by interacting with all the people who come by the food truck, something that was hard for them at first.

"They're not shy anymore," she said. "Now they are open. When we go places, they just talk to everybody. It's been really positive."

The kids learn financial responsibility - they work and earn money at the food truck, which they save for buying their own school clothes at the beginning of the school year.

"They've learned to provide for themselves," Alfreida said. "It is just wonderful."

While they are now making a living, it was not always that way. At the beginning it was hard and it took a lot of time and dedication for the family to start to succeed, but Alfreida said others can do the same thing.

"We had a lot of trial and error, just like any other business," she said. "But anyone can do it as long as they put in the time and effort."

"At the spot where I'm at, I didn't just one day pull up my trailer and say, 'I'm going to sell here,'" Alfreida said. "I had to go to the vendors and say, 'Can I set up by you? Can I vend by you? It's a plus for you and a plus for me.' We worked with each other and we try to stay together so we can help each other."

Alfeida said one of the most important things the family can do is give back to the people in the surrounding communities who have made it so the family can make a living, whether that is donating supplies for runners in Tuba City during a Special Olympics run or trading for a meal from Navajo people who may not have money.

James said in some ways the family is trying to set an example for people on the Nation and on Hopi, to show that they can be self-sufficient too and that it is possible for others to get into self-employment as long as they put in the time and effort.

"That's what we're trying to do," James said. "Mostly, we thank them for their service, for coming here and helping us and eating here. I would like to thank them for that and for the word of mouth, to have people check us out."