Trying to thaw out: Cameron Chapter gets new chapter house
Chapter looks ahead to development, hopes to build community involvement and move out from under legacy of Bennet Freeze 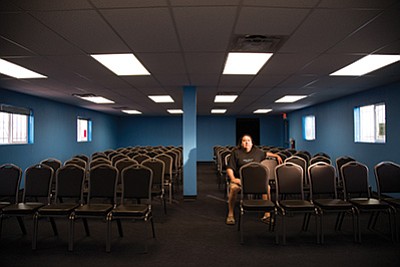 CAMERON, Ariz. - With a new temporary chapter house, Cameron Chapter leadership looks to take small steps into a future that could involve economic development - but that future only can come with community involvement.

The bright blue modular building stands out in Cameron, a dry, dusty town a few feet off Highway 89, which takes people from Flagstaff to Page and Lake Powell and the North Rim. Cameron also stands at the intersection of Highway 64 and Highway 89, which brings people to and from the Grand Canyon from the east bypassing the busy South Rim entrance.

It is that proximity to the Grand Canyon that Cameron Chapter President Milton Tso thinks could bring more prosperity and economic development to the town - one reason why it was important to make sure the new, temporary chapter house had air conditioning and comfortable chairs, where people from the community could feel comfortable deciding the future.

He envisions Cameron as a small Sedona - tourist friendly. Cameron is only half an hour from the Grand Canyon - Flagstaff is an hour and a half. Tourism dollars, unlike coal, could be a steady flow. Millions of tourists drive through Cameron as they travel Highway 89 on the way to the Canyon, to Lake Powell and to Monument Valley and on their way to Flagstaff.

The new modular building cost around $500,000 - Delegate Walter Phelps helped the chapter get the last $100,000 from the Navajo Nation, with the balance coming from the Abandoned Mine Land Fund. Tso said the chapter house is temporary, which could mean 20 years, while plans are made for the old chapter house to be demolished. The chapter has already fixed up the old hay barn as a chapter house, investing in heaters, walls, a ceiling and lights during Tso's time in office but the hay barn does not have restrooms yet. Tso would still like to use it as a building for classes, veterans meetings or other community needs.

"This facility was quick and fast," Tso said. "It has restrooms indoors and air conditioned, which is a big plus this time of year."

But for the time being, the new chapter house cannot be used until it is insured. Tso said that if one building is uninsured, then all the building in the complex are uninsured.

"It will happen quick," Tso said of the payment to get the building insured. "The tribe won't let the insurance lapse too long."

Tso has other visions, too, like getting the chapter certified so Cameron can start collecting taxes on development and keep most of the money in Cameron, minus what would go to the Nation.

A gas station/Burger King is being built in town but Tso believes the town needs fewer gas stations and wishes someone would build a small grocery store.

"Right now, all we have is fast food and convenience stores," he said. "You have to drive to Flagstaff or Tuba City to buy quality food."

There are also plans to withdraw some land for an emergency facility - fire station, Department of Public Safety, Police, helipad and an EMT station, which he hopes will invite more businesses in.

Tso was also talking to people about building a new cultural center at the interchange of Highway 89 and Highway 64 where an arts and craft store and the park ranger office is.

Tso acknowledges no change or economic development can happen without community involvement. He said it is important for parents and kids to be involved in meetings and to voice their concerns and needs before the chapter.

For the communities in the Bennett Freeze, where development was non-existent for so long, Tso realizes that some people have lost hope that anything will change to make their lives better.

"It's been 50 years," he said. "It's just like we're used to it. But there are a lot of angry people out there, indluding myself, who say, 'nothing's happening. We've been out of the freeze for [50 years].The government has had us on the freeze and now that it's been lifted, [nothing is happening].'"

Tso thinks Navajo Nation President Russell Begaye is the first president to push money and development into Bennett Freeze areas but Tso realizes even the president and vice president were not prepared for what the freeze did to the communities on the western side of the Nation. Lack of planning for what would happen when the freeze was lifted, that no money was saved for those communities during the freeze, now makes development a much harder task than it could have been.

"Those millions would already have been working for us now in the way of jobs," Tso said.

But the new chapter is a start, Tso said.

The Arizona Department of Transportation is completing improvements to Highway 89 around Cameron - a new roundabout, bridges, sidewalks and street lights are part of that development. For a Bennett Freeze community, where development was frozen for almost 60 years, the development is incongruous with the surrounding area where there are no sidewalks to homes and where all the houses are not necessarily hooked up to electricity.

Tso said the chapter was involved in the development on Highway 89 but the agreement was formed before the current Cameron administration came into office.

"Me, personally, the lights are overkill," Tso said. "I always joke that one of these days we're going to have a plane land here because everywhere else is dark and you have this line of lights now. It is overkill. I kind of wish they had just put lights at the intersections instead of all the way down."

But Tso acknowledges that the street lights might come in handy for future development because it shows where Cameron can build hotels, businesses and people can get out and walk along the sidewalks.

"Right now, it seems like lights to nowhere but hopefully in the future we will develop some buildings that way and maybe some homes...so, the lights might come in handy," he said. "It is an irony. I am trying to get homes electricity and here comes ADOT and there's lights on the highway with the snap of a finger. I guess if you have the money, you can get the lights."

Tso said it is one of the ironies of the Bennett Freeze.

"We're trying to get people running water and lights and here comes the highway that is full of lights," he said.

But he added that he walks the sidewalks at night and he has started seeing others running and walking on the sidewalks, too.

"It gets everybody off the road. People are using them and we're growing."