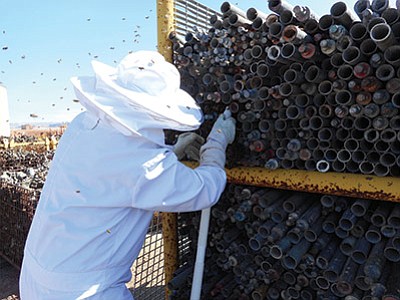 LECHEE, Ariz. - When a swarm of 35,000 honeybees settled on a pipe rack at the Navajo Generating Station (NGS) while searching for a new home, plant officials called a mover instead of an exterminator.

Scaffold builders at the plant came across the basketball-sized swarm at the end of their workday and notified Erwin Roan, an NGS fire specialist with the plant's emergency response program.

"We waited until the next day to go out there to see if the bees would move on their own, but they didn't," Roan said. "That's when we made arrangements for Tom to come out to the site and remove the bees."

That's Tom Geiger, a retired deputy chief of engineering and maintenance at Grand Canyon National Park and a beekeeper. In Page, Arizona, he's known as the man who relocates bees when they suddenly appear where they don't belong.

There's no telling where the NGS bees came from or where they were going, Geiger said. But they knew exactly what they were doing and had prepared for their journey as all bee colonies do, he said.

"They'll come out of their hive and alight somewhere, wherever the queen decides to stop," Geiger explained. "The scouts look for a new home, come back and communicate to the rest of the swarm amongst themselves, and at some point they'll reach consensus on where to go and then the whole swarm will go into their new home."

Geiger put on his protective beekeeping suit and found the swarm clumped and undisturbed about chest high on the pipe rack. He set up his bee-collecting trash bin below the quiet colony and delicately pushed the living mass into it.

"I took my hands and just sort of scooped them into that trash can, put a lid on that one right away, set it off to the side, and vacuumed the rest of the bees," Geiger said. "It's very gentle on the bees. We don't kill bees."

His bee-collecting trash can has a lid with one-way entrances that allow bees to go in but not get back out, he said.

"Recognizing that the queen was in that can, they all went in," Geiger said. "I came back that afternoon, vacuumed about two dozen bees that were hanging around outside the trash can and then moved them to outside of Page."

Assisting Geiger to resettle the NGS swarm and another swarm found near the Page Airport to new hives near Greenehaven was local beekeeper Tracy Baker.

"The reason we come out here is they need to be two miles away or more from where they were caught or they'll go right back," Baker said.

Commercial agriculture, backyard orchards and vegetable gardens every-where need the pollination service that wild honeybees provide, she said. With honeybee hives now located outside of Page, she said her neighbors have commented that their fruit trees have never been as laden with flowers and fruit as they are this year.

About 80 percent of what we eat requires pollination, and honeybees pollinate about 85 percent of that, Geiger added.

Bees may temporarily settle in an unlikely place - like the NGS pipe rack - because they follow their queen, who may tire sooner than the hive's female worker bees and drones. When she lands, the colony naturally gathers around her.

"She flies twice in her life," Geiger said. "She flies to become mated and after that she stays in the hive and lays eggs. That's her only job. And the only other time that she will fly is when the swarm takes off to re-colonize."

Geiger said when a solitary bee suddenly shows up and flies around a person's body or head, it's not necessarily trying to sting them. It's more likely trying to gather information that it will then take back to the hive to communicate to other bees. Geiger said bees have the ability to gather visual cues and use pattern recognition and identification.

"It's incredible," he said. "They're far more intelligent than we think judging from my experience with them and my observations."

Bees are also incredibly social insects, he said. From queen to drones to scouts, every bee in the hive has a job to do for the betterment of the colony. For that reason, Geiger is patient when on assignment to collect and move a swarm to a new safe location.

He will gather as many of the bees as he can on his first visit and return as many times as it takes to collect the last bee.

"We leave no bees behind," Geiger said. "We're like the Marines. No one gets left behind. Every one of these bees goes with me when I leave here. There are no stragglers."

Geiger said his experience with bees has been positive and safe. But he warns that they are defensive creatures and will do what it takes to protect their colony, so caution is always necessary.

"Although swarming bees are generally passive, it is best to be cautious and steer clear," Geiger said.