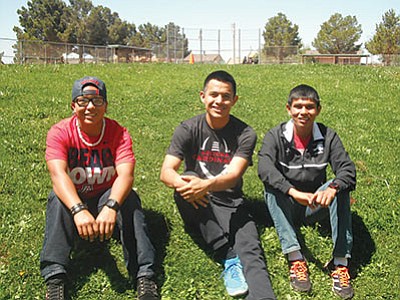 Tuba City High Male and Female Athletes of the Year for 2016 are : Sydney Brown, Roland Becenti and Albert Fuller who excelled in sports and had to also stay on top of their grade point averages to be eligible to play in their sports areas. Submitted photo

TUBA CITY, Ariz. - Four of Tuba City High School's top male and female student athletes were selected "Athlete of the Year" and two of the students also took a second, more competitive honor of "Academic" Athlete of the Year" award, doubling the prestige and recognition with awards selected by high school sports peers and coaches for the high school.

Tuba City Unified School District Governing Board member William Longreed said that the final year end banquet for the sports programs at Tuba City High School was really a celebration of the blending of successful academics with healthy sports activity.

"Most of the student athletes not just succeeded in their chosen sports," Longreed said. "They are also members of the National Honor Society and that makes us all so very proud."