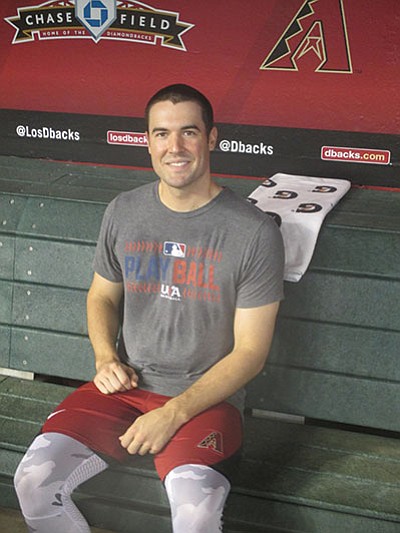 PHOENIX - Robbie Ray, a 6-foot 2-inch starting pitcher for the Arizona Diamondbacks, doesn't know much about his Cherokee heritage, but he enjoyed the festivities related to Native American Recognition Day so much that he wants to learn more about it.

"I didn't grow up on a reservation, so I need to look deeper into it," he said about his heritage during a pregame interview in the Diamondbacks clubhouse.

Ray, who is in his second year in the major leagues, attended the Inter-Tribal and Youth Baseball and Softball Tournament that led up to Native American Recognition Day June 11 at Chase Field.

"All the kids at the tournament peaked my interest," he said. "The tournament was the first time coming here for many of the kids from the reservation. They welcomed me. A lot of them were shy, but once they started they couldn't stop taking photos."

Ray said it was awesome that the Arizona Diamondbacks put on Native American Recognition Day.

"It shows that we care and we are here to support them because they support us," he said. "It's pretty neat that the Diamondbacks are the only team to support a Native American tournament."

Ray said he has a great appreciation for Native Americans supporting the Diamondbacks.

"I'm looking to be involved with them for years to come. It's been a great experience," he said.

Ray was raised in Brentwood, Tennessee, and he was drafted into baseball right out of high school in 2010. He went through the minor league system before having his major league debut in 2014.

"It has been a learning experience. My teammates have been encouraging me and supporting me every day," he said.

Ray believes he's been getting better as a pitcher every year since he was drafted. He's known as a hard throwing left hander, but he knows luck also played a part in getting called up to the major leagues after another player was injured.

"I was in the right situation at the right time," he said.

Ray said pitching in the major leagues is mental as he visualizes situations.

"I have the mental ability to pitch well," he said. "I just need to conquer the mental side of baseball."

The Diamondbacks were ready to have a great season this year after signing pitchers Zack Greinke and Shelby Miller. Greinke started slowly, but has been great during the past month, and Miller so far has been a bust as the Diamondbacks languish under .500

"We're battling to just get on a roll and get a win streak going. We just need to rattle off some wins. We're playing well, but we're just not putting it together," he said.

The Diamondbacks not only beat Miami, 5-3, on Native American Recognition Day, but Ray pitched brilliantly against Miami the next night with seven shutout innings as Arizona won three games in a row for its besting winning streak since early in the season.

Ray said Greinke has been helping him improve.

"Greinke has been very successful so I take bits and pieces to learn from him," he said. "I want to learn to go deeper into the game. I've been trying to do that."

Ray said the Diamondbacks are in a good place with good leaders and good guys.

"We need to elevate our game a bit," he said. "We just need to play our game."

Ray's advice to youth who play baseball is to remember that the game is fun. However, he wants student athletes to remember that grades are important because if they want to play college baseball they are more likely to get scholarships if they have good grades.

Ray said the biggest obstacle to making it to the major leagues was understanding himself and not trying to strike out 300 hitters a year.

"It's better to get more ground balls so you go deeper into the game," he said.

Ray enjoys playing at home or on the road. He said when the games are at home he enjoys being able to sleep in his own bed. But when the Diamondbacks are on the road it gives him more time to hang out with the guys and enjoy their friendships.