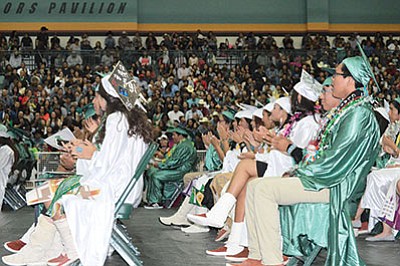 Warrior Pavilion in Tuba City is filled to capacity for the graduation commencement ceremony May 21. Rosanda Suetopka/NHO

The Pavilion can hold a little more than 5,000 visitors and it was filled to capacity.

This year was another visible testament to the mixed community of successful students and supportive families and community, as Valedictorian Shane Moran, who is non-Native, took to the podium along with Navajo Nation tribal member Salutatorian Kolton Chato to give their final words and observations to a receptive audience.

Invocation was given in three different languages. Tanisha George, who is the current Miss TCHS, spoke in Navajo, Tracee Lomatuway'ma gave a Hopi invocation and Jelene Ruiz, who is Fiipine-Tagalog, also spoke in her Native language.

Moran, who was born and raised in Tuba City, gave the beginning portion of his speech in Navajo, though he is not Native. He was raised on the western Navajo Rez and is deeply influenced and treasured by his Tuba City-Navajo and Moencopi-Hopi communities.

Morans' introduction of himself and a little of his family upbringing history in Navajo brought raves, hoots and hollars from the attending crowd. Speaking ones Native language at Tuba City High is deeply honored and respected and encouraged by not just the students, but by the teachers and staff members who serve the student population. Moran's intro was an example of Native language pride.

"I want to thank the staff and administration for this enormous honor to be before you today," Moran said. "I was born and raised here in Tuba City and I'm very, very proud of that. Also if there are any grammatical errors in my speech this morning, you can blame TCUSD No. 15 for that. As for my own personal academic success, I want you to know I have cheated on every single test I ever took, gave $50 to our Principal Mary Frances Begay to get to where I am today. I wish I had some profound revelation to share with you this morning but I have none. I also want to thank the front office staff for all the long speeches we had to listen to on the intercom. I think the only thing I can really say to my fellow graduates this morning that might be helpful is that we really have the ability to make a difference. I hope you all can see that and will strive for excellence."

Salutatorian Kolton Chato also kept his speech brief and to the point.

"When I first sat down to write this speech, I knew I didn't want to make it long," Chato said. "I can say to my fellow graduates, that we will cherish all these high school memories. I want to thank my family for always being there and for putting up with me during these 12 years of school. We have a lot ahead of us to accomplish, we will face new and exciting challenges. We have a lot to be thankful for."

The top student from the Nizhoni Accelerated Academy (NAA), which is the TCUSD alternative high school, this year was Amber Pavinyama. Pavinyama, a member of the Hopi Tribe, also gave a short speech on behalf of her fellow Academy students with words of honor and encouragement. The NAA is one of the only state accredited alternative high schools, which give full academic credit to graduates who want to continue on to higher education from an alternative school setting.

Goatcher has been a teacher at Tuba City High School for 43 years and is one of the top five teacher mentors that the students name as their favorite every year.

Goatcher has been honored as the TCHS Homecoming Grand Marshall, named Cross Country Coach of the Year by the Arizona Sports Association and is honored over and over in the Tuba City-Moencopi community for his kindness, encouragement and willingness to help out a student who is struggling in class or at home or who needs some words of understanding and support.

"Wow, I'm not sure if I'm worthy of all the lofty praise given by Shane just now," Goatcher said. "Not sure if I can live up to the hype. It's quite an honor to be speaking before you this morning, I have seen so many wonderful things here at TCHS and met so many wonderful students during my 43 years of teaching. But I think our best days are ahead of us. When I first came to Tuba City, there were over 7,000 students in this district. I have seen kids, parents and grandparents in our community who have come through my classroom. I'm sure there are lots of my former students sitting in the audience right now. Can I ask for those who were my former students to wave at me?"

When Goatcher asked this of the crowd, hundreds of waving hands were seen all over the Pavilion bleacher section and chairs.

"I want to say that I was originally inspired to become a teacher when I first met a Lakota Sioux runner named Billy Mills," Goatcher added. "I was a high school freshman in Colorado and I met my first real Native American. His name was Chet Mills and he was the nephew to Billy Mills who was the First Native American to win an Olympic gold medal for running. Chet and I became close friends and he invited his uncle Billy to speak at our high school. When Billy Mills got to our auditorium he let several of us hold his gold medal. It was really something. Billy said to us, 'Don't waste your talents.' I was deeply moved and inspired by that.

So when I went onto college, I took every single Native American history class I could find. So I also want to echo what Billy Mills said to me way back then and I want to share that with all of our students here at Tuba City High. Find your talent. Use it to your full potential. Don't waste that talent and surely don't settle for mediocrity. Be respectful. Be thankful. Show the world what you are capable of doing. And don't forget, once a Warrior, always a Warrior!"

Goatcher got a standing ovation for his uplifting and encouraging speech.