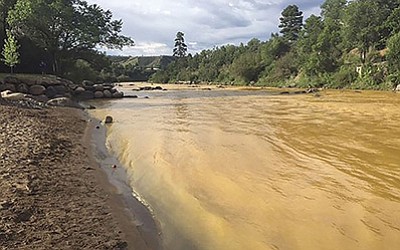 The Animas River runs yellow with toxin-tainted wastewater in August after a spill from the abandoned Gold King Mine. A Senate panel has set an April 22 hearing in Phoenix on the issue. Photo/Colorado Parks and Wildlife Department via Reuters

Currently the Navajo Nation falls under EPA Region 9, which is responsible for implementing federal environmental laws within the boundary and jurisdiction of the Navajo Nation. Region 9 includes all of California, Arizona, Nevada and Hawaii and encompasses 148 Native American tribes.

"We believe that a Navajo Region would greatly improve implementation and enforcement of federal environmental laws across the Navajo Nation," Begaye said. "It has become apparent that Region 9 has struggled with the challenges of implementing environmental laws in a culturally unique area over 750 miles away from the regional office."

Ever since the Gold King Mine spill in August 2015, Begaye has advocated for the EPA to create a region specific to the Navajo Nation. The Nation encompasses over 27,000 square miles and spans boundary over three states.

It took the EPA three days to notify the Navajo Nation, by which time the Office of the President and Vice President had already notified all surrounding tribal communities and set a Declaration of Emergency in place to address the disaster.

The president's office said that the creation of a Navajo Regional office would improve performance in areas like the Navajo AUM while strengthening the enforcement of federal environmental laws across the Navajo Nation.