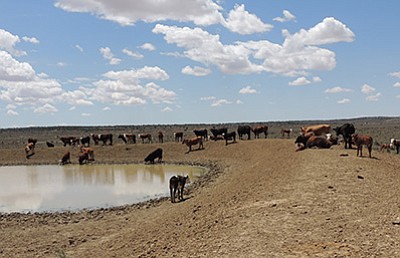 KYKOTSMOVI, Ariz. - More than 90 head of cattle were impounded on Hopi June 7 after a family was cited for letting cattle graze without a permit, according to the Hopi Tribe.

The Hopi Tribe's Resource Enforcement Services (HRES) and the Hopi Office of Range Management (ORM) from Hopi Range Unit No. 262 impounded the cattle. The tribe has the authority to impound livestock without permits and to protect and preserve Hopi lands. Hopi Tribal Ordinance states that the provision "protects private and public property on Hopi lands from livestock in fields or causing damage or have caused damage on reservation lands."

The cattle were impounded after a second incident within 60 days, in which the same person was cited for trespass while receiving other violations that were uncorrected. The first incident occurred April 5 when HRES impounded 66 head of cattle belonging to the same individual, who does not have a permit to graze on the Hopi range unit.

Not all the livestock that were in trespass were impounded at the time because some had crossed over into Navajo Partitioned Land (NPL). It is estimated that 127 head of livestock have been grazing in unit No. 262. The carrying

capacity, which is the maximum stocking rate possible without inflicting damage to vegetation or related sources, is 28 sheep per grazing permit, which converts into 35 cows for this range unit.

The Hopi Office of Range Management met with the livestock owner April 11 to discuss the remaining livestock that were on the unit. The Hopi Tribe agreed to allow the individuals 30 days to remove the additional livestock, with a deadline of May 12. On April 13, the person paid the trespass penalties that were imposed and the livestock were released. The person was informed that the livestock were not to be returned to Hopi lands. On May 9, the range management office made contact with the person that the 30 day time limit was set to expire and that after that date, the Hopi Tribe, at any time, could impound livestock deemed to be in trespass.

The tribe said the individual and family members whose livestock have been impounded have been informed since 2014 regarding the requirement of holding a permit. In 2015, the cattle's owner was given a second opportunity to comply with requirements of being a grazing permit holder on Hopi Partitioned Lands. In 2016, "Voices of the People," the Navajo Nation representative group made up of Accommodation Agreement permittees, did not issue a grazing allocation for the individual and family members because of violations that were not corrected for more than a year. Because of this, any livestock owned by the individual would be in trespass.

All livestock counts carried out by the Hopi Tribe and its programs are a requirement of the 638 contract between the tribe and the Bureau of Indian Affairs. Livestock counts on all Hopi lands are required annually to ensure that permittees are in compliance with Hopi Grazing Ordinance 43.