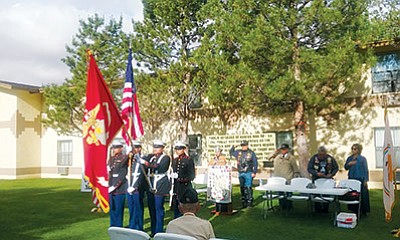 TUBA CITY, Ariz. - On May 18, the Navajo Hopi Honor Riders held a ceremony to honor local Korea War vets at the Quality Inn and Hogan restaurant in Tuba City where a handful of Korean veterans accepted medals of appreciation.

Lemual Adson, a honor rider and veteran, emceed the event and mentioned fallen soldier Lori Piestewa who was killed in action March 23, 2003 during Iraqi Freedom. Adson was a teacher at the time when Piestewa lived in Tuba City.

"She played softball and was quite an athlete and I still recall when I heard she was missing," he said. "Out of 500,000 soldiers, it was one of our children."

The Tuba City High School ROTC presented the colors at the event while Miss Greyhills Maegan Dugi sang the national anthem in Navajo.

As the honor riders approached, a crane provided by the National Transportation Utility Authority hoisted a giant flag above Main Street.

Larry Noble, honor rider, gave a history on the creation of the Navajo Hopi Honor Riders.

"Originally, the riders rode to honor fallen soldier Lori Piestewa," he said. "Her parents, Terry and Percy asked that this not be the first and last ride and that [the honor riders] should continue honoring veterans."

Tuba City was the birthplace of the honor riders, he said, but riders come from all over including Minnesota, Missouri and Virginia for the annual event.

"Riders are volunteers that do the run every year and we even had a soldier in service come to participate just for this event," Noble said. "Riders do honor riders for veterans across the Nation, and even for other tribes. [We] have riders from all over the United States."

Special recognition was given to Army Spc. Christopher J. Moon given by Tex Walker Moon. Moon lost his life in 2010 while serving in Operation Enduring Freedom. He is the son of Brian and Marsha Moon from the Cameron area. Moon was the recipient of many honors for his service in Afghanistan and his service.

An appearance was made by Joseph Nam Lee, a missionary from South Korea, who sang "Amazing Grace" in Navajo to the delight of the crowd. Lee expressed his gratitude for the Korean War veterans for their service for helping his country and gave information on the number of Native American who served in wars throughout the years.

Robert Begay, a Korean War veteran, spoke about the history of the Korean War and how it was not a very popular war. Begay talked about different politics involved regarding different countries involved in the conflict. Begay has been active in area veteran's groups and he said he was glad to see that recognition was given to veterans of this conflict.

Andrew Kelly, a Vietnam veteran, gave closing remarks as the honor riders prepared for their ride out of Tuba City.

Following the morning ceremony a luncheon was provided by the Tuba City Chapter where veterans were acknowledged. Jamescita Peshlakai represented the Navajo Nation president and vice president's office.

Peshlakai pointed out many of the veterans who were part of her life growing up.

"My close relative reside in the fairgrounds area," she said. "I grew up in the area and am proud to be a part of the event recognizing local Korean War veterans."

Bobby Robbins, another veteran, recognized many of the veterans who played a role in making the event come to reality.

Longtime Tuba City resident Richard George gave the closing remarks. George spent many years actively engaged in veteran's activities, always donating his time for local events, such as parades where he would enter his old Willy's Jeep. He advocated for the Korean War veterans tirelessly throughout the years and brought attention to the need to recognize this group of forgotten veterans from the forgotten war.

The local veteran's office, headed by Eunice Begay, the Navajo Hopi Honor Riders, Tuba City Regional Health Care Corp. and the Tuba City Chapter all had a hand in making the event a reality.