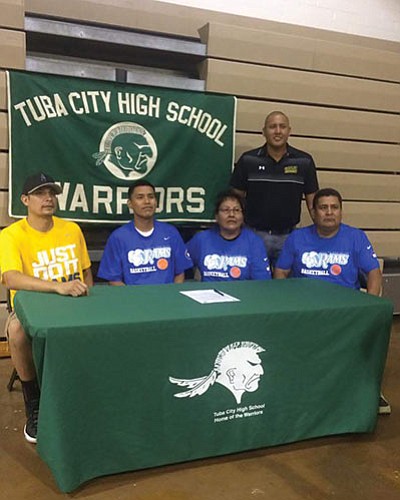 Yazzie, who was originally only interested in football and baseball, got a slow start in basketball until high school, but then started to take it much more seriously the past 3 years.

Yazzie's court skills and playing strategy caught the eye of the men's basketball program director at Little Big Horn College and they signed him with his parents witnessing the contract ceremony.

Little Big Horn College is a tribal college located on the Crow Indian Agency with an enrollment of around 400 students. The school is made up of 93 percent Crow agency tribal members, 2 percent other tribal members and the rest non-Native local community members.

"He really deserves this opportunity for all the hard work he put in this past few years," Roe said. "It will be a great opportunity to show his skills in this Division 1 level of basketball playing. DaVean has the discipline and the positive attitude to help Little Big Horn in their game strategy. I just wish him the best."