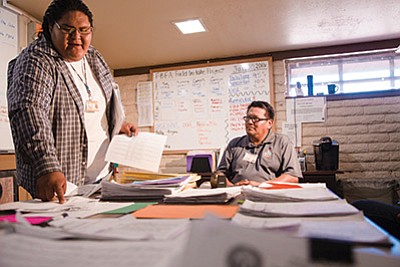 TUBA CITY, Ariz. - It is already hot at 9 a.m. when members of the Former Bennett Freeze Area Field Intake project head out to assess another home in the To'Nanees'Dizi Chapter, part of its five-year land use plan update.

One Northern Arizona college student, Charmayne Flatrock, and three Adult Workforce Department workers, Ronda Anderson, Eva Wilson and Larsena Slender, head out to the areas around Tuba City. The workforce employees are certified in rural addressing, they went to training, and once the project ends Aug. 12, those workforce workers will help with the rural addressing system.

It only takes a few minutes to leave the paved road and hit sandy dirt. No more sidewalks and utilities. Houses are trailers and some of them look like they could use some help - a new roof, a way to keep in heat or a way to keep out heat.

After passing a few houses with loose dogs, they pull up to a set of trailers and get out to conduct a full field assessment and interview with the man who is home. He gives them permission to speak to him and conduct the assessment.

Even though the students and workers are from this area, not all of them have seen exactly how community members affected by the Bennett Freeze live in this area. The work they are doing is bringing them in close contact and it is an eye opening experience.

In order for money to come in from the federal government or from the Navajo Nation for capital improvement or community development projects, each local government on the Nation needs to complete an assessment, which makes feasibility studies and cost sharing for the projects easier.

For areas in the Bennett Freeze, which include nine chapters on the western side of the reservation, those projects always come down to housing and economic development. The Bennett Freeze, instituted in 1966 by then commissioner of the Bureau of Indian Affairs Robert Bennett, froze development of any kind on approximately 1.5 million acres of land that was in dispute by the Navajo Nation and the Hopi Tribe. From 1966 until 2008, when President Barack Obama lifted the freeze, no development or improvement to housing was allowed to take place.

Anderson said her heart goes out to people living in the rural areas and who have lived so long without the necessities in life, which make them feel like they are living in a third world country even though they are not. She said it is important for people within the community to understand how the elderly and even young people - because grandparents are raising their grandkids when parents left the reservation to find jobs, but cannot support the kids off the reservation - live so that money can come in and support the whole community.

"We're at the point that we can only help a few, which is ridiculous," Anderson said. "We need to help everyone. We're all Native, we all have census numbers. They all make sure we have CIB's (certificate of Indian blood) and if we have that, we should be able to receive those funds because that is what our people were promised."

They all realize that if they do not do this work, no one else will from the Nation or anywhere else.

"They don't come out here because they say it's a long drive," said Wilson, one of the field intake workers. "But if they need something, we go out there [to Window Rock]."

Slender, another field intake worker, said despite the heat, she loves what she is doing.

"I think some of us were born and raised here. I was raised here, even though I was born somewhere else and I have gotten to know a lot of people around here."

That sense of community and giving back to the community is what drives all the workers, for their kids and every generation in the future.

Flatrock, a senior, said she got involved with the project at first because she needed a summer job and something to keep her busy. She was interested in learning new technology, like how to use the Global Positioning System devices and Google Earth for their tracking. But it did not take long for her to notice how people were living outside of town, toward the Gap, Preston Mesa, along heavy dirt trails or even just outside the city limits of Tuba.

"For me, I have always lived in town with utilities," Flatrock said. "My family has always had water and electricity and we have a pretty structural home. We have been blessed and lucky. But some of these homes are really running down. I started reflecting back that the whole point of this was to help the people. I learned that this is actually really important. This can make some changes. We're actually helping people."

The students and workers are also the first to do this kind of work on such a large scale. When Flatrock heard that, it made an impact on the impact of the work she is doing and changed her intention from when she first started.

"It really hit me," she said. "It hit me on how it will actually impact the community, the people here. It will make a big difference. It is not something that will just happen right then and there. It will take time and a lot of these people understand that. It will take a lot of time but even just a small step can make a huge difference."

The team updating the land use plan, consists of 18 college students and five workers from the Adult Workforce Department, who work in the Former Bennett Freeze Area, which includes Grazing District 3-3, which is part of the To'Nanees' Dizi Chapter, a little more than 900,000 acres.

What is unique about the project is the college students, who are home on summer break, were tasked with figuring out a way to use existing technology to assess the homes and collect and store the data. The assessment is supposed to be done by the Navajo-Hopi Land Commission, which has several different funding sources, one of which is $2 million from the Navajo Housing Authority, to complete assessments that have not been done.

"We're tired of waiting, we're tired of hearing the outcries from our community," said Brian Kensley, project manager for the assessment for the To'Nanees'Dizi local government. The chapter earmarked about $95,000 to do the assessment themselves. "The Tuba City Chapter is not going to wait for the Navajo Nation and the president, we're actually going to take the initiative and do it ourselves. We're tired of waiting on the big government, the Navajo Nation, to make a decision, we're tired of the leaders just talking about it, we're going to actually do it."

The students are all third or fourth generation Bennett Freeze families. Everyone working on the project is connected to Tuba City, having been born or raised there and are Tuba City registered voters.

Allen Danny Joe, team leader, who is a student at Arizona State University, said the project is much bigger than a bunch of college students running around. They have worked with Navajo Housing Authority to condense forms to get the correct information. Joe created forms and another student created the pamphlets that are handed out to residents. The computers are networked together and map all the data the workers gather in the field and keeps track of each individual home in a database.

"[The managers] said you guys are smart individuals, you can figure it out and I guess we figured it out," Joe said.

The team also revisits areas where people were not home or if not all the information was gathered.

In smaller chapters, gathering some of this information would be easier. But Tuba City is a large chapter with approximately 10,000 people, according to reported figures. Five Adult Workforce workers were hired specifically because they could speak Navajo - a lot of the elders only speak Navajo and not all of the college students know enough Navajo to be able to conduct the assessments without a fluent Navajo speaker to help out.

Kensley said the students go above and beyond what would normally be expected. They volunteer after hours, they are out in the heat working but mostly they are working as a team and learning how to communicate with each other.

"I am so proud of our college students and our workforce development workers as well," he said. "I'm really happy with our staff and the administration here who have really allowed us to do what we're doing. I'm really hoping our leaders can do something with the report when we send it out Sept. 30."

One of the main things that Kensley wants leaders and the president of the Nation to see is that students across the Nation can help their communities in the same way that the Tuba City students are helping their own community.

"The Nation really needs to move into this new generation and welcome them back," he said.

The students have created a Geographical Information System, which can be sent to delegates and leaders, the president of the Navajo Nation, to Congress, or to the president of the United States and they will be able to pinpoint a location and show real time information for that home and the application itself. The information is confidential and is only used within established guidelines by the chapter. Neighboring chapters are already expressing interest in what the students are creating and asking for help in assessing their own chapters.

While there are funds from the Nation for this type of project, Tuba City decided to do it on their own.

"I don't know if we're going to get any reimbursement back," Kensley said. "I think we're actually taking a risk but in the long run it's going to complement our E-911 system, our rural addressing system and our land use plan update because it is all interrelated."

To create the system, the students and workforce workers use a hand held Global Positioning System, which pin points exactly where residence and roads are. They take a UTM (Universal Trans Meridian), a fancy term for longitude and latitude. The workers also take note of waterlines, septic tanks, leach fields, outhouses, electric poles, meter loops and power line poles. In addition, each house is assessed, inside and out with pictures using and digital camera and an interview is completed with anyone living there, a separate case file is compiled for anyone living in each residence who is 18 years of age or older.

The assessment includes important criteria: figuring out how many people live at each residence, how close the residence is to infrastructure, like electric, water and roads, whether there is a home site lease or an existing grazing permit and a certificate of Indian blood, which are all criteria the federal government looks at for funding.

All applications and assessments are in compliance with federal standards that are used to receive grants or housing money from different sources. When all the information is compiled, the chapter will be able to tap into money from the Navajo-Hopi Land Commission, the Navajo Nation, the Navajo Housing Authority and other state, federal, nonprofits and private entities.

The workers are also creating a physical address verification for rural addressing and a E-911 system to improve response times for emergency and public safety workers.

Kensley said it is impossible to improve housing conditions for some of the people in the Bennett Freeze areas without also addressing economic development because people cannot sustain their homes if they do not also have a job.